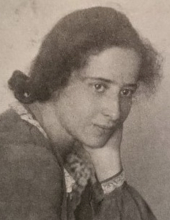 On this date in 1906, German-born American political philosopher Johanna “Hannah” Arendt was born in Linden, Prussian Hanover, in the German Empire. In 1924 Arendt enrolled at the University of Marburg to study under Martin Heidegger, the foremost existential phenomenologist of the 20th century. Arendt, born into a secular family of German Jews, was briefly imprisoned by the Gestapo in 1933, after which she fled to Czechoslovakia, then to Geneva, then Paris, and finally to New York in 1941.

In 1951 she published The Origins of Totalitarianism, a study of the Nazi and Stalinist regimes. Next, in 1958, Arendt published The Human Condition — “an original philosophical study that investigates the fundamental categories of the vita activa (labor, work, action).” (Stanford Encyclopedia). After writing The Human Condition, which was to be her most important philosophical work, Arendt traveled to Israel to attend the trial of Adolf Eichmann, a Nazi war criminal. Her recounting of the trial, Eichmann in Jerusalem: A Report on the Banality of Evil (1963), is her most controversial and well-known work.

Arendt was a devoted secularist and humanist. In her book On Revolution (1963), she explored the religiosity of modern democracies. She contended that emerging democracies in the West mimicked the divine source of legal authority that their absolutist predecessors had claimed. According to Arendt, founders of European and American democracies feared that, without a sacred sanction for their new democratic governments, their often violent struggles for freedom would be seen as illegitimate.

Arendt’s secularism was frequently the source of controversy in postwar debates. She opposed Zionist nationalism and sought to engage with Judaism on political, rather than religious, terms. D. 1975

“The defiance of established authority, religious and secular, social and political, as a worldwide phenomenon may well one day be accounted the outstanding event of the last decade.”