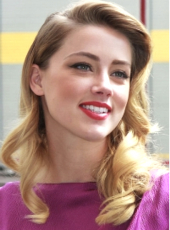 On this date in 1986, actress Amber Laura Heard was born in Austin, Texas, to Patricia Paige and David Heard. She dropped out of high school when her best friend died in a car accident (after which she declared herself an atheist at age 16). She later completed the requirements for a diploma. She started her acting career in television and music videos and began appearing in more substantial roles with "Friday Night Lights" (2004) and the next year in "North Country," in which she played Charlize Theron's character in flashbacks.

Other roles followed, including "Pineapple Express" (2008), "Zombieland" (2009) and 2011's "The Rum Diary" opposite Johnny Depp. Heard received a 2008 Young Hollywood Award for what was called a breakthrough comedic performance in "Pineapple Express." Her increasing popularity was attested to by the 2013 nationwide theater release by The Weinstein Co. of her film "All the Boys Love Mandy Lane," which premiered at the 2006 Toronto Film Festival. It was announced in early 2016 that she would have starring roles as Queen Mera in the Justice League and Aquaman movies.

She came out publicly in 2010 as bisexual, an admission she had resisted because of fears it would hurt her career. She and Depp, 22 years her senior, married in February 2015 and divorced contentiously in 2017. Her daughter, Oonagh Paige Heard, was born in April 2021 via a surrogate mother. After a six-week trial in 2022 on claims and counterclaims of defamation, a jury found Heard libeled Depp in a 2018 op-ed alleging domestic abuse. Depp was awarded $10.35 million in damages. The jury also found one of Depp's lawyers defamed Heard and awarded her $2 million.

Heard has been involved with LGBT rights, Amnesty International and the United Nations program Girl Up. Her beguiling physicality has also landed her on numerous magazine covers, including Missbehave in April 2008. In that issue, she talked about how being raised in "a strict Catholic environment" led her to know "I will never be a religious person."

In an interview, she recalled students at her Catholic middle school getting extra credit for "community service" by protesting at abortion clinics. "I remember going into the classroom during homeroom and [my classmates] were making these posters with terrifying images, and I remember saying to myself, 'I would rather be unpopular than do that to another human being.' " (net-a-porter.com, Nov. 30, 2018)

"I'd like to thank the way I was raised for giving me enough knowledge about organized religion to make the adult decision to live the rest of my life without it. I don't think you can believe or not believe in anything unless you know a lot about it. I know Christianity, especially Catholicism, like the back of my hand. And my education has given me the freedom to know that it is completely absurd for me to believe it."