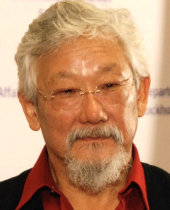 On this date in 1936, scientist and environmental advocate David Suzuki was born in Vancouver, British Columbia. His family was subjected to internment in Canada during World War II and relocation afterward. He earned his undergraduate degree in biology from Amherst College in 1958 and his Ph.D. in zoology from the University of Chicago in 1961. He joined the University of British Columbia in 1963 and worked as a genetics professor until retiring in 2001.

He has been awarded 25 honorary degrees and is the recipient of numerous other awards for his work in science, environmental activism, science writing and science broadcasting. Suzuki has written over 50 books, including 19 children's books and a widely used genetics textbook, An Introduction to Genetic Analysis (1976).

His television work includes "The Brain," a Discovery Channel series; "The Secret of Life," a PBS/BBC series; and "The Nature of Things with David Suzuki." His more popular documentaries include "It's a Matter of Survival" and "From Naked Ape to Superspecies." He is a co-founder of the David Suzuki Foundation, whose goals are protecting nature and the climate, transforming the economy, reconnecting with nature and building community.

He was married to Setsuko Sunahara from 1958 to 1965. They had three children. In 1973 he married Tara Cullis, with whom he had two daughters.

“As an atheist, Suzuki declares, he has no illusions about life and death, adding that the individual is insignificant in cosmic terms. Human beings must come to terms with the unbearable reality that they, like all life, will be extinguished.”