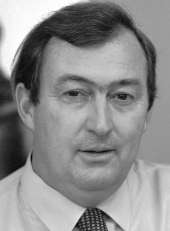 On this date in 1944, Richard Erskine Frere Leakey was born in Nairobi, Kenya, to the famous archaeologists Louis and Mary Leakey. As a child, Leakey accompanied his family on archaeological expeditions and discovered his first fossil when he was 5. After dropping out of high school when he was 16, Leakey entertained various careers such as leading safaris, but ultimately chose to follow in his parents’ footsteps, becoming an accomplished paleoanthropologist.

His achievements included finding the full skeleton of a 1.6 million-year-old Homo erectus known as "Turkana Boy" and co-discovering in 1972 the “Black Skull" (also known as "1470"), the earliest australopithecine fossil discovered to date. He also wrote numerous books, including Origins, co-written with Roger Lewin (1977), The Making of Mankind (1981), Origins Reconsidered (with Lewin, 1992), The Sixth Extinction (with Lewin, 1995) and Wildlife Wars: My Fight to Save Africa's Natural Treasures (with Virginia Morell, 2001).

Caned in school as a child for missing chapel, he vowed to never become Christian. “I didn’t ever have religion,” Leakey said during an interview with the Academy of Achievement on June 21, 2017. Since his uncle was the Anglican archbishop of East Africa, Leakey's professed atheism didn't sit well with some of his family, friends and teachers.

In the early 1960s he started a trapping and skeleton supply business with Kamoya Kimeu, soon expanding it into photographic safaris. He made his first forays into paleoanthropology and met archaeologist Margaret Cropper. In 1965 they married but divorced in 1969 after having a daughter, Anna. He married zoologist Meave Epps in 1970 and they had two  daughters: Louise, also a paleoanthropologist, and Samira.

He worked with his father at the Centre for Prehistory and Palaeontology but differences led Leakey in a different direction. With others he started working to "Kenyanise" the National Museum. Over the next decade he took part in expeditions that made a number of stunning archaeological discoveries. In 1990 he was appointed the first chairman of the Kenya Wildlife Service and spearheaded efforts to stop elephant poaching. A plane he was piloting crashed in 1993 and both his legs had to be amputated. He told President Daniel Arap Moi, a religious man, not to pray for him. (Interview in The Humanist, June 29, 2012.)

Leakey left Kenya in 2002 to teach anthropology at Stony Brook University in New York and chair the Turkana Basin Institute. In  2007 he was appointed interim chairman of Transparency International's Kenya branch. and was elected a Fellow of the Royal Society. In 2013 he received the Isaac Asimov Science Award from the American Humanist Association. President Uhuru Kenyatta appointed Leakey chairman of the board of the Kenya Wildlife Service in 2015.

In a 2010 interview with Richard Dawkins for the 2008 documentary “The Genius of Charles Darwin,” Leakey said, “Surely, [evolution] should be the pride and joy of African leaders. But the faith brigade, whether they’re evangelical Christians, whether they’re conservative Catholics, whether they’re Islamic fundamentalists, are quite worried about this concept and are trying desperately to persuade ongoing future generations to have nothing to do with it."

“I myself do not believe in a god who has or had a human form and to whom I owe my existence. I believe it is man who created God in his image and not the other way round.”