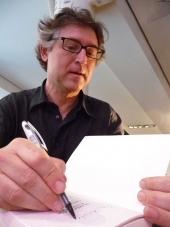 On this date in 1959, Michel Onfray was born in Argentan in northwest France. He taught philosophy in high school in Caen from 1983 to 2002. During this time he received his doctorate from the University of Caen in 1986. Onfray’s first book, Le ventre des philosophes, critique de la raison diététique (The Philosophers’ Stomach: A Critique of Dietary Reasoning) was published in 1989.

Onfray has written over 100 published books, which are popular throughout France as well as other parts of Europe, Latin America and even East Asia. However, only one, Traité d’Atheologie (2005) has been published in English: Atheist Manifesto: The Case Against Christianity, Judaism, and Islam.

In 2002 he founded the Université Populaire (People’s University) in Caen, at which he and others give free lectures on philosophy and other intellectual topics. The main thrust of Onfray’s work is atheist, materialist and hedonist. On the [email protected] website affiliated with the Institute of Neurosciences, Mental Health and Addiction, Bruno Dubuc writes: “The French author Michel Onfray may be the philosopher who best represents the hedonist tradition today. In his many works, Onfray attempts to reposition the human body at the centre of our world view. ... Onfray specializes in a certain ancient philosophy that has been buried under 2000 years of Christianity.”

In Atheist Manifesto, Onfray makes a strong case for removing all the remnants of Judeo-Christian ideology from our secular culture. Onfray is also a historian of philosophy who loves to point out why many philosophers are undeserving of our respect. He has so far published six volumes in the series La contre histoire de la philosophie (The Counter-History of Philosophy).

Photo by Perline via CC 3.0

“I persist in preferring philosophers to rabbis, priests, imams, ayatollahs, and mullahs. Rather than trust their theological hocus-pocus, I prefer to draw on alternatives to the dominant philosophical historiography: the laughers, materialists, radicals, cynics, hedonists, atheists, sensualists, voluptuaries. They know that there is only one world, and that promotion of an afterlife deprives us of the enjoyment and benefit of the only one there is. A genuinely deadly sin.”