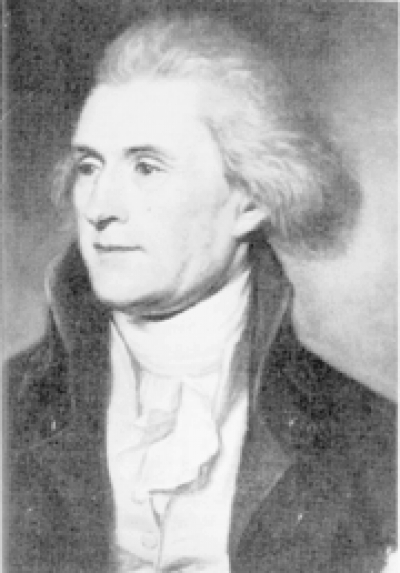 On this date in 1743, Thomas Jefferson, who became the third U.S. president, was born in Virginia. As a young attorney and member of the Continental Congress, Jefferson drafted the Declaration of Independence. Jefferson became Governor of Virginia in 1779, when the Anglican Church was disestablished as the state religion.

He wrote the Virginia Statute of Religious Freedom, whose preamble indicted state religion, noting that "false religions over the greatest part of the world and through all time" have been maintained through the church-state. The heart of the statute guarantees that no citizen "shall be compelled to frequent or support any religious worship, place, or ministry whatsoever." It was adopted in 1786 and is replicated in most other state constitutions.

Jefferson spent five years in France as an ambassador, and therefore was out of the country at the time of adoption of the U.S. Constitution. He strenuously urged the addition of a Bill of Rights. He became the first secretary of state in 1789, vice president in 1796, president in 1800 and reelected in 1804.

In his Notes on Virginia (1781), Jefferson, a Deist, wrote: "Millions of innocent men, women and children since the introduction of Christianity have been burnt, tortured, fined, imprisoned. Yet have we not advanced one inch towards uniformity. What has been the effect of coercion? To make one half the world fools and the other half hypocrites. To support roguery and error all over the earth."

He contemptuously rejected the holy trinity concept, regarded Jesus as a human teacher only and in 1804 composed a 46-page New Testament extraction titled The Philosophy of Jesus of Nazareth. In an October 1813 letter to John Adams, he wrote: "I have performed this operation for my own use, by cutting verse by verse out of the printed book, and arranging the matter which is evidently his, and which is as easily distinguishable as diamonds in a dunghill." In 1820 he produced what became known as the Jefferson Bible, 84 pages. It was titled The Life and Morals of Jesus of Nazareth.

As president he issued his famous letter to the Baptists of Danbury, Connecticut, on Jan. 1, 1802, explaining that the Establishment Clause of the First Amendment builds "a wall of separation between church and state." He refused to issue any days of prayer or thanksgiving, believing civil powers alone were conferred on public officials.

Jefferson instructed that the epitaph on his tombstone read: "'Author of the Declaration of American Independence, of the Statute of Virginia for Religious Freedom & Father of the University of Virginia,' because by these, as testimonials that I have lived I wish most to be remembered." He and John Adams died on the same significant anniversary of July 4, 1826.

"Question with boldness even the existence of a God; because, if there be one, he must more approve of the homage of reason than that of blindfolded fear. ... Do not be frightened from this inquiry by any fear of its consequences. If it ends in a belief that there is no God, you will find inducements to virtue in the comfort and pleasantness you feel in its exercise, and the love of others which it will procure you."