Is America A Christian Nation?

This nontract is available for sale from FFRF's shop

The U.S. Constitution is a secular document. It begins, “We the people,” and contains no mention of “God” or “Christianity.” Its only references to religion are exclusionary, such as, “no religious test shall ever be required as a qualiﬁcation to any ofﬁce or public trust” (Art. VI), and “Congress shall make no law respecting an establishment of religion, or prohibiting the free exercise thereof” (First Amendment). The presidential oath of ofﬁce, the only oath detailed in the Constitution, does not contain the phrase “so help me God” or any requirement to swear on a bible (Art. II, Sec. 7). If we are a Christian nation, why doesn't our Constitution say so? In 1797 America made a treaty with Tripoli, declaring that “the government of the United States is not, in any sense, founded on the Christian religion.” This reassurance to Islam was written under Washington’s presidency, and approved by the Senate under John Adams.

What about the Declaration of Independence? 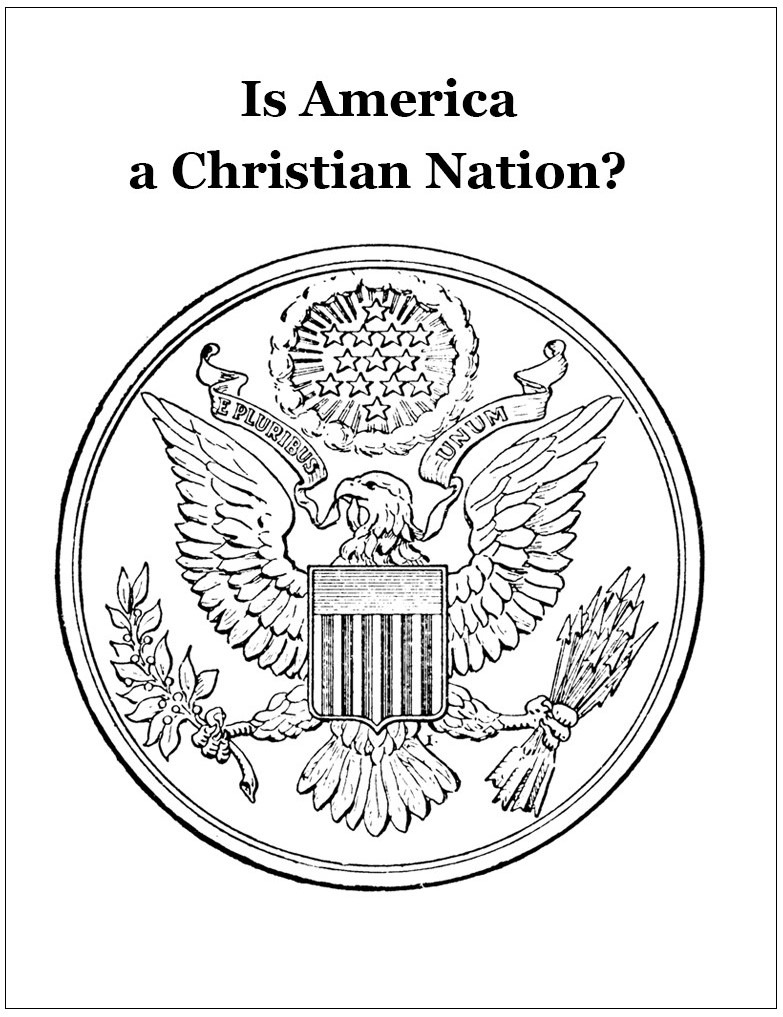 We are not governed by the Declaration. Its purpose was to “dissolve the political bands,” not to set up a religious nation. Its authority was based on the idea that “governments are instituted among men, deriving their just powers from the consent of the governed,” which is contrary to the biblical concept of rule by divine authority. It deals with laws, taxation, representation, war, immigration, and so on, never discussing religion at all. The references to “Nature’s God,” “Creator,” and “Divine Providence” in the Declaration do not endorse Christianity. Thomas Jefferson, its author, was a Deist, opposed to orthodox Christianity and the supernatural.

What about the Pilgrims and Puritans?

The ﬁrst colony of English-speaking Europeans was Jamestown, settled in 1609 for trade, not religious freedom. Fewer than half of the 102 Mayﬂower passengers in 1620 were “Pilgrims” seeking religious freedom. The secular United States of America was formed more than a century and a half later. If tradition requires us to return to the views of a few early settlers, why not adopt the polytheistic and natural beliefs of the Native Americans, the true founders of the continent at least 12,000 years earlier?

Most of the religious colonial governments excluded and persecuted those of the “wrong” faith. The framers of our Constitution in 1787 wanted no part of religious intolerance and bloodshed, wisely establishing the ﬁrst government in history to separate church and state.

Do the words “separation of church and state” appear in the Constitution?

The phrase, “a wall of separation between church and state,” was coined by President Thomas Jefferson in a carefully crafted letter to the Danbury Baptists in 1802, when they had asked him to explain the First Amendment. The Supreme Court, and lower courts, have used Jefferson’s phrase repeatedly in major decisions upholding neutrality in matters of religion. The exact words “separation of church and state” do not appear in the Constitution; neither do “separation of powers,” “interstate commerce,” “right to privacy,” and other phrases describing well-established constitutional principles.

What does “separation of church and state” mean?

Thomas Jefferson, explaining the phrase to the Danbury Baptists, said, “the legitimate powers of government reach actions only, and not opinions.” Personal religious views are just that: personal. Our government has no right to promulgate religion or to interfere with private beliefs.

The Supreme Court has forged a three-part “Lemon test” (Lemon v. Kurtzman, 1971) to determine if a law is permissible under the First-Amendment religion clauses. (1) A law must have a secular purpose. (2) It must have a primary effect which neither advances nor inhibits religion. (3) It must avoid excessive entanglement of church and state. The separation of church and state is a wonderful American principle supported not only by minorities, such as Jews, Moslems, and unbelievers, but applauded by most Protestant churches that recognize that it has allowed religion to ﬂourish in this nation. It keeps the majority from pressuring the minority.

What about majority rule?

America is one nation under a Constitution. Although the Constitution sets up a representative democracy, it speciﬁcally was amended with the Bill of Rights in 1791 to uphold individual and minority rights. On constitutional matters we do not have majority rule. When the majority in certain localities voted to segregate blacks, this was declared illegal. The majority has no right to tyrannize the minority on matters such as race, gender, or religion.

Not only is it unAmerican for the government to promote religion, it is rude. Whenever a public ofﬁcial uses the ofﬁce to advance religion, someone is offended. The wisest policy is one of neutrality.

No one is deprived of worship in America. Tax-exempt churches and temples abound. The state has no say about private religious beliefs and practices, unless they endanger health or life. Our government represents all of the people, supported by dollars from a plurality of religious and non-religious taxpayers. Some countries, such as the U.S.S.R., expressed hostility to religion. Others, such as Iran (“one nation under God”), have welded church and state. America wisely has taken the middle course—neither for nor against religion. Neutrality offends no one, and protects everyone.

The First Amendment deals with “Congress.” Can’t states make their own religious policies?

Under the “due process” clause of the 14th Amendment (ratiﬁed in 1868), the entire Bill of Rights applies to the states. No governor, mayor, sheriff, public school employee, or other public ofﬁcial may violate the human rights embodied in the Constitution. The government at all levels must respect the separation of church and state. Most state constitutions, in fact, contain language that is even stricter than the First Amendment, prohibiting the state from setting up a ministry, using tax dollars to promote religion, or interfering with freedom of conscience.

What about “One nation under God” and “In God We Trust?”

The words, “under God,” did not appear in the Pledge of Allegiance until 1954, when Congress, under McCarthyism, inserted them. Likewise, “In God We Trust” was absent from paper currency before 1956. It appeared on some coins earlier, as did other sundry phrases, such as “Mind Your Business.” The ofﬁcial U.S. motto, chosen by John Adams, Benjamin Franklin, and Thomas Jefferson, is E Pluribus Unum (“Of Many, One”), celebrating plurality, not theocracy.

Isn’t American law based on the Ten Commandments?

Not at all! The ﬁrst four Commandments are religious edicts having nothing to do with law or ethical behavior. Only three (homicide, theft, and perjury) are relevant to American law, and have existed in cultures long before Moses. If Americans honored the commandment against “coveting,” free enterprise would collapse! The Supreme Court has ruled that posting the Ten Commandments in public schools is unconstitutional.

Our secular laws, based on the human principle of “justice for all,” provide protection against crimes, and our civil government enforces them through a secular criminal justice system.

Why be concerned about the separation of church and state?

Ignoring history, law, and fairness, many fanatics are working vigorously to turn America into a Christian nation. Fundamentalist Protestants and right-wing Catholics would impose their narrow morality on the rest of us, resisting women’s rights, freedom for religious minorities and unbelievers, gay and lesbian rights, and civil rights for all. History shows us that only harm comes of uniting church and state.

America has never been a Christian nation. We are a free nation. Anne Gaylor, president of the Freedom From Religion Foundation, points out: “There can be no religious freedom without the freedom to dissent.”

This nontract is available for sale from FFRF's shop