For an overwhelming part of U.S. history, America's motto was purely secular, "E Pluribus Unum" (From many [come] one). E Pluribus Unum was chosen by a committee of Jefferson, Adams and Franklin. Many Americans mistakenly assume our founders chose "In God We Trust" as the motto, but nothing could be further from the truth. Our founders were committed to a secular government. For most of U.S. history, our money was likewise free of religion. 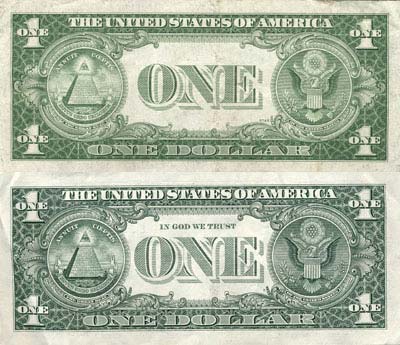 Of all of the complaints over state/church entanglement received by the Freedom From Religion Foundation, none has received more complaints from our membership than the inscription "In God We Trust" on currency.

To learn more about how a religious motto supplanted U.S. secular heritage, read on and see the links below.

The Freedom From Religion sued the federal government in 1994 to have "In God We Trust" removed from currency and as our national motto.

The Foundation lawsuit was dismissed by a 10th-circuit federal judge on the grounds that "In God We Trust" is not a religious phrase. The Foundation appealed the dismissal.

In God We Trust Appealed To High Court
Freethought Today, May 1996

Emblazoning In God We Trust in public schools furthers that goal. The new laws in most of these states mirror the model bill in the Project Blitz handbook. Some legislators pushing these bills are unaware of their connection to Christian nationalism, while for others it’s exactly why they support them. FFRF is actively working to oppose the efforts of Project Blitz, including the placement of In God We Trust in public schools around the country.

In August of 2019, FFRF Director of Strategic Response and constitutional attorney Andrew L. Seidel wrote a three-part series on In God We Trust for Rewire News. The first installment tells the story of the motto’s sketchy origin. The second installment examines the motto’s legality. The third installment reveals the coordinated battle waged by an emboldened Christian nationalist movement known as “Project Blitz."