The nontracts below may be read online for personal viewing and reference. They are copyrighted and belong to FFRF. All rights reserved. This material may not be reprinted or distributed without the express written permission of the Freedom From Religion Foundation. FFRF makes these nontracts available in brochure form by the dozen or in bulk to make distribution cost-effective and easy.

The story of Jesus was copied from earlier mythologies. It is cut from the same fabric as many other ancient superstitions. Following are nine of the more than 20 Savior/Sun gods who were said to be born of a virgin and sacrificed to save mankind. 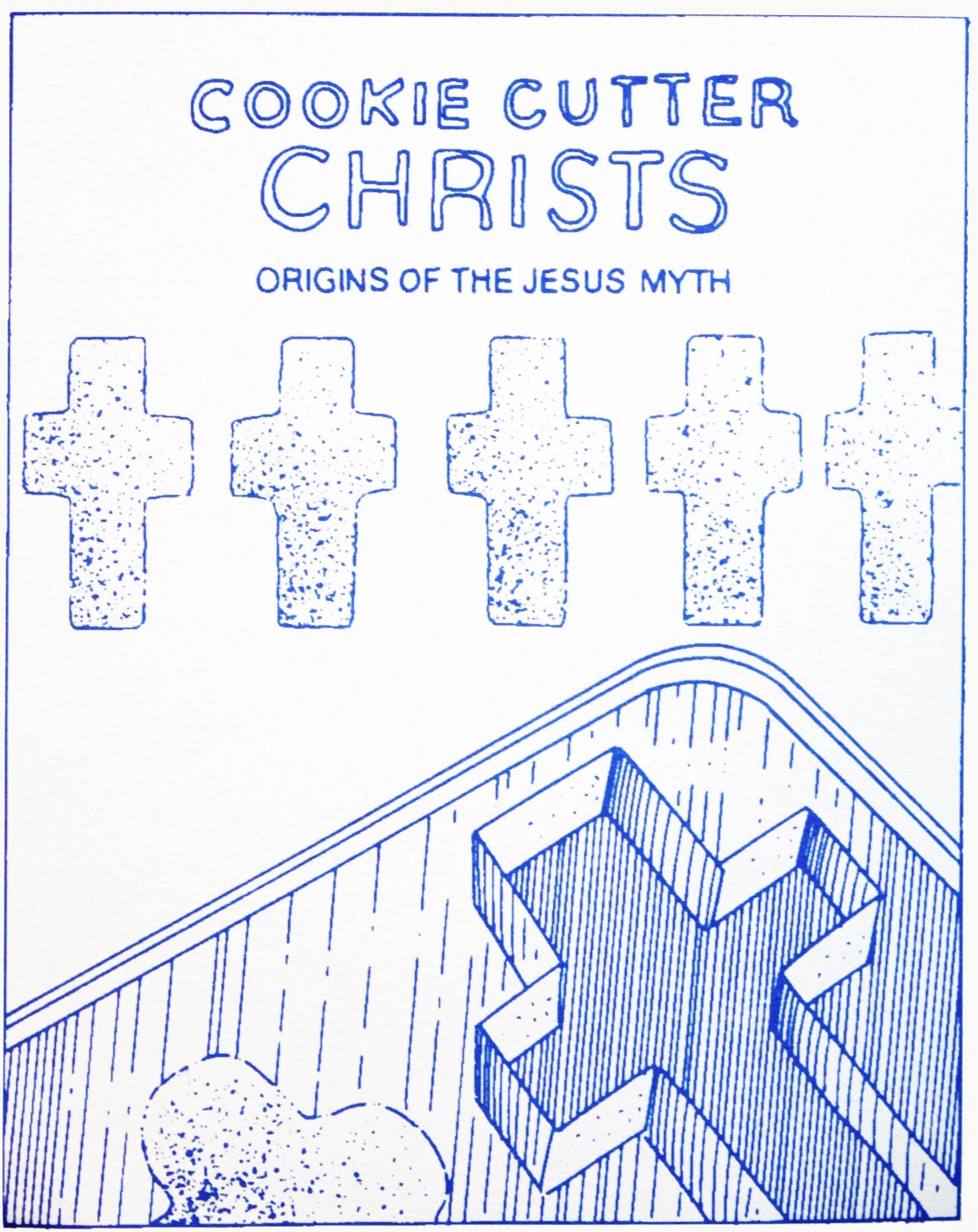 Mithra
The birthday of Mithra, an ancient sun-god born of a virgin about 600 BC, was celebrated on December 25. Magi brought gifts to his birth. His first worshippers were shepherds and he was followed in his travels by 12 companions. Mithra was slain upon a cross in Persia to make atonement for humankind and take away the sins of the world. His ascension to heaven was celebrated at the spring equinox (Easter).

Mithra celebrated "Last Supper" with his 12 disciples. The Mithraists observed weekly sabbath days and celebrated the Eucharist by eating wafers marked with a cross. He was the great sun-god of the Roman world, the most powerful pagan faith in the Empire.

Mithra was born in a cave just as Jesus was. The words of St. Paul, "They drank of that spiritual rock, and that rock was Christ," are borrowed from the Mithraic scriptures; for not only was Mithra "The Rock," but one of his mythological acts (also appearing in the acts of Moses) was the striking of the rock, which water came from.

Attis
Attis was born of a virgin mother named Nana, in Phrygia, sometime before 200 BC. He was hanged on a tree, died, rose again, and was called "Father God."

The Attis Cult became prominent in Rome about the year 204 BC. The festival of the death of Attis was celebrated yearly from March 22 to the 25th, and its influence on Christianity is undeniable, for in Italy, Gaul and Phrygia, the early Christians adopted March 25th as the date of the passion of Christ.

Buddha
Gautama Buddha, the 9th Avatar of India, was born about 600 BC of the Virgin Maya, or Mary. His incarnation was accomplished by the descent of the Holy Ghost upon Maya. Some Buddhists believe that soon after birth, the infant Buddha spoke to his mother, saying, "I will put an end the suffering and sorrow of the world." A mystical light surrounded the infant.

Buddha performed miracles, was crucified, and he descended into Hades (hell) to suffer for three days, and then ascend into heaven. In Hinduism, the word Avatar means a god coming down in bodily form to the earth; incarnation.

Krishna was the eighth Avatar of the Hindu Pantheon and is said to have lived about 1200 BC. The parallels between the life of Krishna and the life of Jesus Christ, as related in Christian mythology, are so close that some scholars believe that Christian writers copied their account from the Hindus.

The history of Krishna is contained principally in the Bhagavad Gita, the episode portion of the Mahabharata bible. The book is believed to be divinely inspired, like all other bibles; and the Hindus claim for it an antiquity of 6,000 years.

Krishna was born of a virgin, Devaki. An angelic voice from heaven announced to her: "In thy delivery, O favored among women, all nations shall have cause to rejoice." Krishna's birth in a cave was heralded by a star. He was visited by wise men who brought him valuable presents. In the Apocryphal Gospel "Protoevangelion," a work attributed to James the brother of Jesus, we have been told that the Christian Savior was also born in a cave. Krishna began speaking to his mother shortly after birth. Jesus also spoke to his mother shortly after birth, saying, "Mary, I am Jesus, the Son of God."

Hundreds of precepts uttered by Krishna display a profound wisdom and depth of thought equal to any of those attributed to Jesus Christ. The birth of Krishna occurred while his foster father Nanda was in the city to pay his taxes to the king. King Kansa sought the life of the Hindu Christ by ordering the slaughter of all male children born the same night as was Krishna. Krishna performed numerous miracles in Mathura and was crucified.

Quexalcote
Quexalcote, a Mexican god, was born in 587 BC of a virgin mother by the name of Chimalman. Hers was an immaculate conception, just like the Virgin Mary's.

Many striking counterparts to the story of Jesus are found in Quexalcote's sacred biography: his 40 days' temptation and fasting, riding on an ass, purification in the temple, baptism and regeneration by water, forgiving of sins, being anointed with oil, etc.

He was crucified on a cross, with two thieves being crucified with him. He was put to death, buried, descended into hell, and resurrected on the third day.

Horus
Horus was born of the virgin Isis in Egypt around 1550 BC. He and his mother were of dark skin.

Horus as an infant received gifts from three kings, and was crucified on a cross. There are about 200 close parallels of the careers of Horus and Jesus Christ.

Adonis
The god Adonis was born of a virgin mother called Ishtar (Easter), depicted like the Virgin Mary with her divine child in her arms. Likewise, she was hailed as the Queen of Heaven.

Adonis was regarded as both the son and husband of his mother Ishtar, as God the Father and God the Son. This Babylonian legend is an archaic version of the Christian nativity story-God the Son incarnating as Jesus, while at the same time he is God the Father. (Was Jesus both Son and Husband of the Virgin Mary?)

The worship of Adonis (Tammuz) was quite popular among the Semites of Western Asia around 2000 BC. Adonis was crucified, and resurrected. He was sacrificed as was Jesus to save humankind.

Quirinus
Quirinus was a Roman savior born in the year 506 BC of a virgin mother. When he was crucified by King Amulius, the whole earth is said to have been enveloped in darkness, as was said of Christ.

Indra
Indra was born in Thibet in 725 BC. His mother was a virgin of black complexion, hence his was of the ebony hue, as in the case of Christ and some other sin-atoning saviors. He descended from heaven on a mission of benevolence, and ascended back to the heavenly mansion after his crucifixion. He led a life of strict celibacy, which he taught was essential to true holiness. He inculcated great tenderness toward all living beings. He could walk upon the water or upon the air; he could foretell future events with great accuracy. He practiced the most devout contemplation, severe discipline of the body and mind. Believers said that Indra was crucified and that there was proof he was nailed to a cross.