What's Wrong With The Ten Commandments?

The nontracts below may be read online for personal viewing and reference. They are copyrighted and belong to FFRF. All rights reserved. This material may not be reprinted or distributed without the express written permission of the Freedom From Religion Foundation. FFRF makes these nontracts available in brochure form by the dozen or in bulk to make distribution cost-effective and easy..

What's Wrong With The Ten Commandments? 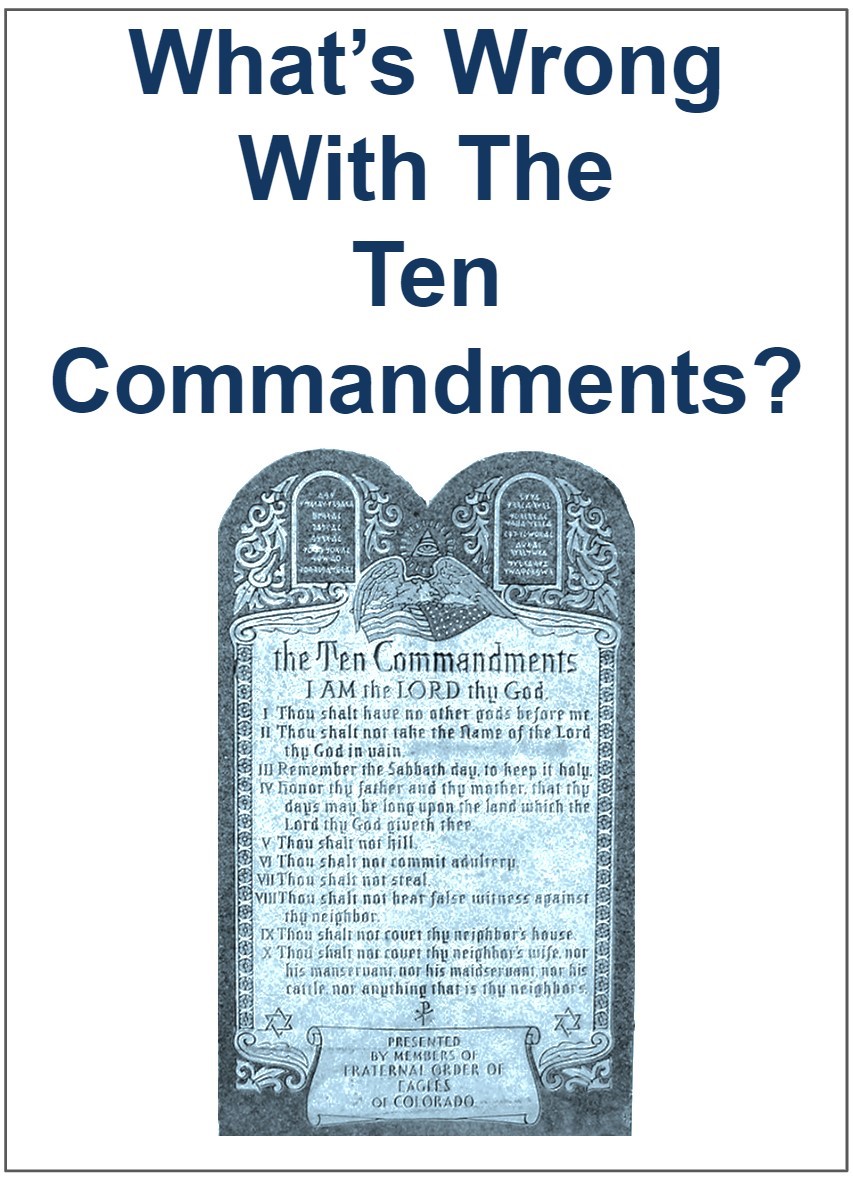 Critics of the Christian bible occasionally can score a point or two in discussion with the religious community by noting the many teachings in both the Old and New Testaments that encourage the bible believer to hate and to kill, biblical lessons that history proves Christians have taken most seriously. Nonetheless the bible defendant is apt to offer as an indisputable parting shot, "But don't forget the ten commandments. They are the basic bible teaching. Study the ten commandments."

Do study the ten commandments! They epitomize the childishness, the vindictiveness, the sexism, the inflexibility and the inadequacies of the bible as a book of morals.

Actually, only six of the ten commandments deal with an individual's moral conduct, which comes as a surprise to most Christians. Essentially, the first four commandments say:

1. Thou shalt have no other gods before me.
2. Thou shalt not make thee any graven images or bow down to them, and if you do I'll get you and your kids and their descendants.
3. Thou shalt not take the name of the lord in vain.
4. Keep the Sabbath holy.

The exact terminology is found in chapter five of Deuteronomy. Two other versions of the "ten commandments" can be found in the Old Testament. One version, in Exodus 20, differs slightly from the Deu­ter­onomy version, while a third, in Exodus 34, is wildly different, containing commandments about sacrifices and offerings and ending with the teaching: "Thou shalt not seethe a kid in its mother's milk." This is the only version referred to in scriptures as the "ten commandments."

In essence, the first four commandments all scream that "the lord thy god" has an uneasy vanity, and like most dictators, must resort to threats, rather than intellectual persuasion, to promote a point of view. If there were an omnipotent god, can you imagine him or her being concerned if some poor little insignificant creature puttered around and made a graven image? Do you think that any god, possessing the modicum of good will you could expect to find in any neighbor, would want to punish children even "unto the third and fourth generation" because their fathers could not believe? How can anyone not perceive the pettiness, bluster, bombast and psychotic insecurity behind the first four commandments? We are supposed to respect this!

"Honor thy father and thy mother" is the fifth commandment, and it is, of course, an extension of the authoritarian rationale behind the first four. Honor cannot be bestowed automatically by an honest intellect. Intellectually honest people can honor only those who, in their opinion, warrant their honor. The biologic fact of fatherhood and motherhood does not in and of itself warrant honor. Until very recently parenthood was not a matter of choice. It still is a mandatory, not optional, happening for many of the world's people. Why should any child be commanded to honor, without further basis, parents who became parents by accident—who didn't even plan to have a child? All of us know children who have been abused, beaten or neglected by their parents. What is the basis for honor there? How does the daughter honor a father who sexually molests her? "Honor only those who merit your honor" would be a more appropriate teaching, and if that includes your parents, great! "Honor your children" would have been a compassionate commandment.

Commandments six through nine—thou shalt not kill, commit adultery, steal or bear false witness—obviously have merit, but even they need extensive revision. To kill in self-defense is regrettable, but it is certainly morally defensible, eminently sensible conduct. So is the administration of a shot or medication that will end life for the terminally ill patient who wishes to die.

Adultery, the subject of the seventh commandment, again raises the question of an absolute ban. For the most part fidelity in marriage is a sound rule, making for happiness; but some marriages may outlast affection. Some couples may agree to live by different rules. Until relatively recent times Christian marriages were not dissolvable except by death, so the ban of divorce coupled with the ban of adultery obviously created great distress. Adultery, it must be remembered, involves an act between consenting adults. How much more relevant and valuable it would be to have, for instance, a commandment that forbids the violent crimes of rape and incest.

"Thou shalt not steal" raises questions regarding the usefulness of a blanket condemnation, and may put squatter's rights ahead of public and private welfare. Should people who are cold or ill steal to ameliorate their situations? Should the child who is hungry steal? Surely this commandment cries for some amending clauses. One is reminded of the comment of Napoleon, who really had religion figured out: "How can you have order in a state without religion? For, when one man is dying of hunger near another who is ill of surfeit, he cannot resign himself to this difference unless there is an authority which declares, 'God wills it thus.' Religion is excellent stuff for keeping people quiet."

Finally, the tenth commandment, which riles the feminist blood, says: "Neither shalt thou desire thy neighbor's wife, neither shalt thou covet thy neighbor's house, his field, or his manservant, or his maidservant, his ox, or his ass, or anything that is thy neighbor's." In addition to rating a wife with an ox and an ass, the bible loftily overlooks the woman who might desire her neighbor's husband. Covetousness somehow does not seem like such a crime. If you can't have a comfortable house or a productive farm, what is the great harm in wishing you did? Covetousness may be nonproductive and unpretty, but to make a big, bad deal out of it is ridiculous. Bible apologists sometimes will excuse the triviality of the tenth commandment on the basis that to covet, in a more superstitious age, meant "to cast an evil eye." Someone who coveted "his neighbor's house" was purportedly casting an evil eye on that property with a view toward its destruction. Whether one accepts the apologist's definition of covet or the more popular meaning, the tenth commandment lacks real importance.

Little in Christianity is original. Most of it is borrowed, just as the celebration of Christmas was borrowed from Roman and earlier pagan times. When the "lord" supposedly wrote his commandments on two tablets of stone and delivered them to Moses (Deut. 5:22), he was only aping earlier gods: Bacchus, Zoroaster and Minos.

Reflect for a moment that almost anyone reading this nontract could write a kinder, wiser, more reasonable set of commandments than those that Christians insist we honor. Try it!

This material may not be reprinted without the express written permission of the Freedom From Religion Foundation. All nontracts are available for purchase for a small fee which allows FFRF to recoup its printing costs.