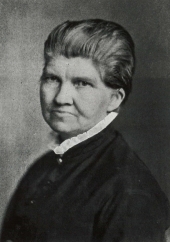 On this date in 1827, Elmina Drake, the daughter of a Shaker preacher expelled for becoming a "Liberal," was born in La Grange, New York. She wrote for nearly all of the freethinking journals of her era and knew many of the reformers. She advertised successfully for an egalitarian husband in the Water-Cure Journal and married Isaac Slenker, Quaker-style.

She preached alcoholic and sexual temperance, adopting a philosophy called "Dianaism," which taught sexual sublimation and practices to avoid unwanted pregnancies in a manner too plain-spoken for the guardians of the Comstock Act. At the age of 60 in April 1887, Slenker was arrested for mailing sealed letters of advice on sex and marriage to private correspondents.

With bail set at $2,000, she was shown into a cold cell with a blanket on the floor. The New York Times critically reported in its coverage of her newsworthy arrest that she refused to swear on a bible and testified at a preliminary hearing that she did not believe in god, ghosts, heaven, hell, the bible or Christianity.

The pleasant, ordinary-looking woman was vilified as "homely" for sporting a short haircut. Unable to raise bail she spent six months in jail and was indicted on July 12, 1887. Freethinking attorney Edward W. Chamberlain represented her during her October trial, where a jury found her guilty. She was set free on a technicality by the judge on Nov. 4, 1887. Truth Seeker readers paid her legal expenses.

She wrote Studying the Bible in 1870, edited Little Freethinker and wrote several novels, including The Clergyman's Victims, The Infidel School-Teacher and The Darwins. She died in Virginia in her early 80s in 1908.

"I became a sceptic, doubter, and unbeliever, long ere the 'Good Book' was ended.”