Help FFRF Put Up a Billboard in Your Area 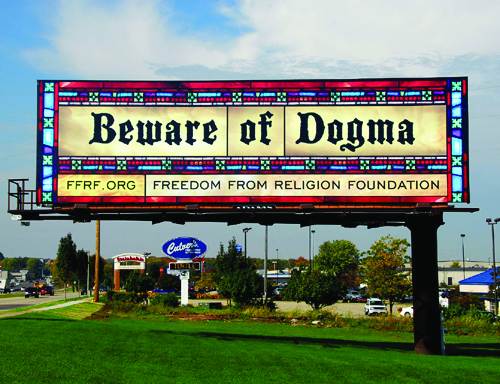 We are delighted to work with FFRF members interested in placing billboards in their area. FFRF has a goal to place our billboards in every state (except Hawaii, where they are banned), especially in capital cities. How you can help:

1. When you’re out and about, take note of promising billboard sites and locations. Contact the billboard company (whose name is on the bottom of the board) to ask about availability and costs. Most companies will shoot you an e-mail with a photograph, estimated daily traffic figures, and monthly costs. This information can be forwarded to This email address is being protected from spambots. You need JavaScript enabled to view it..

If the board you’re interested in isn’t available, ask the company for suggestions of promising sites. FFRF relies on a local contact to scope out billboard locations and confirm they are in a good spot, that trees, etc., aren’t obscuring their view, etc.

Once a location is agreed on, FFRF asks for a nonprofit rate (sometimes extended), and signs the contract directly.

What’s a good site? As a nonprofit, FFRF has managed to find moderately priced billboards, but some have been less expensive in rural areas and a few flashy boards in urban areas far more expensive. A smaller "poster" billboard by the side of a downtown building in a nice area may actually be better than a high-priced billboard on a freeway. It’s a bonus if the billboard location permits easy access for photographs by media (and souvenir photographs by members!).

Accessibility and visibility of a billboard site is probably more important than traffic estimates for FFRF purposes. Thousands may zoom past a billboard on the highway without heeding our sign. But a smaller billboard in a pleasant, well-known urban location (particularly by state capitols or courthouses, landmarks or tourist sites) may attract more media attention.

2. You may donate toward the billboard campaign. Some of the billboards placed in the past year by FFRF have been suggested and paid for entirely or partly by generous local members. Others have been paid for via the Billboard Fund (designate to advertising/PR fund), a pool of contributions collected for this purpose. (Just earmark your check for the "Billboard Fund.") All donations to the Foundation are deductible for income-tax purposes.

3. Once a Foundation billboard is up, use it as the device to write a positive letter to the editor or op-ed piece, such as this opinion piece by Foundation member Jan Brazill in Colorado. This continues to educate!

Help us counter all that religion on the roadside!

Thank you for your interest and help!