FFRF Staff and Board

Home › About › Staff / Board › Annie Laurie Gaylor
Staff and Board

Since November 2004, serving with Dan Barker.

Freedom From Religion Foundation, Madison, Wisconsin, 1976, when she was a college student, with her mother Anne Nicol Gaylor. Annie Laurie first joined FFRF’s staff in 1985, and served as editor of Freethought Today until 2009. The Foundation incorporated as a national nonprofit educational organization with two purposes in 1978 under the leadership of Anne Nicol Gaylor and works to protect the constitutional principle of state/church separation and to educate about nontheism.

Freethought Today, the only freethought newspaper in the United States, which is published ten times a year by the Freedom From Religion Foundation, Inc. Annie Laurie edited it from 1984 to 2009, when she became an executive editor.

Woe to Women: The Bible Tells Me So (FFRF, Inc., 1981), a reader's guide to the bible's treatment of women, in its fifth printing

Women Without Superstition: "No Gods - No Masters" (FFRF, Inc. 1997), an anthology of women freethinkers.

Annie Laurie, with her husband Dan Barker, co-hosts the weekly Freethought Radio, which has broadcast and podcast since 2006, and is co-host of Freethought Matters, FFRF's weekly TV show.

The Feminist Connection, a Madison-based monthly advocacy newspaper Annie Laurie founded, edited and published from 1980 - 1985, which drew warm acclaim for its exposes, perceptive stories and effective advocacy for women. Author Meridel LeSueur called it the "most nonpatriarchal" feminist periodical of its time.

Annie Laurie was on her first feminist picketline at age 14. Her most recent activism included spearheading, with her mother, the movement to keep the "Forward" statue, a monument dedicated to women, outside the Wisconsin State Capitol where it has been for a century, which included collecting more than 6,000 signatures. She was co-chair for more than a decade of the Feminist Caucus of the American Humanist Association, which bestows an annual 'Humanist Heroine' award at AHA conferences.

Annie Laurie served on the Board of Directors of the Women's Medical Fund for 30 years, the longest continuously-operating abortion rights charity in the nation, founded by her mother, Anne Gaylor, Prof. Robert West and the late Peg West (all atheists). She served as secretary and also became a co-administrator after Anne's death in June 2015, serving until 2020. The all-volunteer Fund has helped more than 25,000 indigent Wisconsin-area women exercise their constitutional right to safe abortion care. She remains a donor.

Annie Laurie is married to Dan Barker, a musician and former evangelical minister, who is now a freethought author and FFRF co-president. They have a daughter, born in 1989, plus Dan has four children from a first marriage, grandchildren and great-grandchildren. 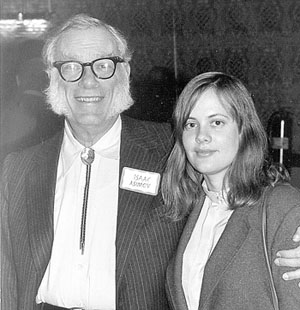 Annie Laurie consented to have her picture taken with Isaac Asimov, at the New Jersey FFRF chapter "winter solstice banquet," 1985, where both of them were speakers.

A protest that went 'round the world 1977 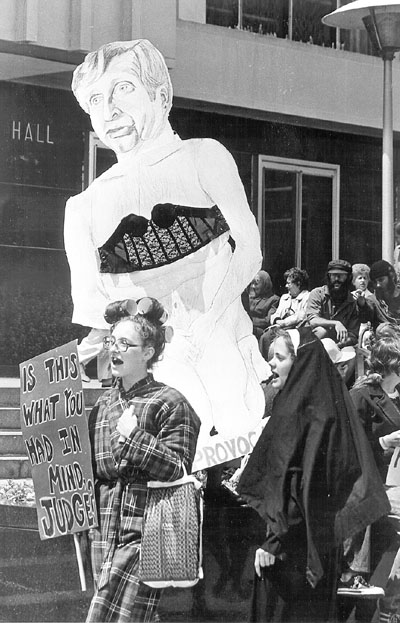 Annie Laurie as a nun?

Annie Laurie called the first picket against Dane County (WI) Judge Archie Simonson for making his infamous 1977 statement that "Rape is a normal reaction." The statement and others blaming rape on women and their attire, was made at the sentencing of three juveniles who gangraped a teenaged girl at their Madison high school. The victim was wearing jeans and a long-sleeved turtleneck.

Annie Laurie's mother Anne Gaylor, on behalf of the local National Organization for Women, issued the first press release demanding Simonson's recall. An outraged community went on to make history and successfully recall the ultra-religious judge, booting him out of office and replacing him with a woman judge.

College students Annie Laurie Gaylor, dressed in a nun's habit, and Barbara Kavadias, in orange-juice-can curlers and frumpy bathrobe, shared a sign asking "Is this what you had in mind, Judge?" at one of the protest rallies. Annie Laurie's effigy of Simonson in a "merry widow" garment was titled "le provocateur." A similar photo was picked up by worldwide media and Time magazine. Photo credit: Norris J. Klesman, 1977 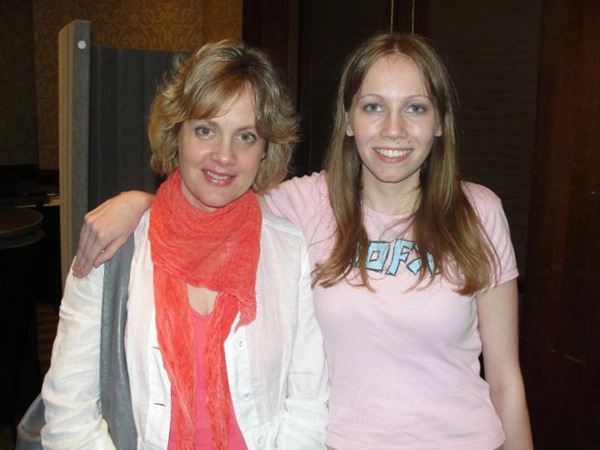 Annie Laurie Gaylor, after receiving the 2010 Humanist Heroine award by the American Humanist Association, pictured with Jafsica Freitag. Annie Laurie shared the honor with Meg Bowman, an FFRF member who co-chaired the AHA Feminist Caucus with Annie Laurie for many years.