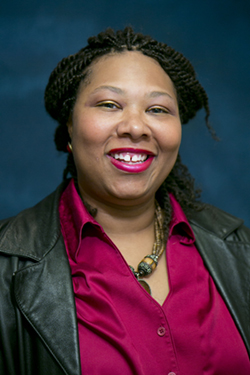 I’m a journalist and reporter and a radio show host in Washington, D.C. I’ve been a hellraiser since before I was allowed to cross the street by myself. As a journalist, I really take issue with a lot of what’s happening in this country.

I really take issue with the fact that, frankly, in this modern era, reporters are people who like to be on television, talking in this weird voice, flipping their “helmet hair” and asking questions that a really smart 22-year-old intern has written for them. There is not much critical thought to what they do. They don’t understand history, and they certainly don’t understand science. They don’t understand politics, yet they’re informing our population.

I’m really happy to be talking to you now because this morning built upon what I want to explain to you. We got to see how the local reports about FFRF’s work are kind of skewed. Nobody wants the picture of our lord and savior Jesus Christ taken down. Why would anyone ever object? Use a different stairwell if you don’t like it.

My show, the “Sex, Politics and Religion Hour: SPAR with Jamila,” is on the radio in D.C., New York, Chicago and Miami. After January, the Voice of Russia radio network is going to broadcast me in English to 166 different countries. I’m really excited about that because voices like mine were not heard for way too long.

The minute I hit 18, I was like, “Yes, it’s happened. I can say what I want,” and that’s what I’ve really been working to do. I am a student of democracy. I’m a student of this great American experiment. We’ve got it right — this is a nation formed by secular ideals, where everyone is valued, but we have to be able to go to the public square and put forth our ideas.

At least that’s the way it was supposed to be. The problem and the opportunity is that in this modern era, anybody can get up and say anything and if you have money behind you, your money equals speech. I’ve got a huge, huge problem with that.

It’s my obligation as an American to try my damnedest to advance the principles upon which this great nation was founded. I understand that we’re not perfect. I can give you a whole lot of reasons why I take issue with the founders, but let’s not throw the baby out with the bath water.

So I get to be loud and obnoxious and cheeky and I have the coolest job in the world. But I need some help from smart folks like you. I need you to go back to your respective hamlets and townships and big cities and I need you, when you see reporting like we saw [in a video] earlier, I need you to call up those stations. I need you call up those news directors. I need you to write letters to the editor and say, “Why was it that you didn’t — there’s a university here! Why didn’t you ask anyone from the biology department? Why would you only interview . . . ?

We all have to take responsibility for this democracy in which we live and raise our voices. I love the fact that we’re here, in the heartland, where you know, this is Jesus country. And it don’t look too Jesus-y ’round here [in this room] to me. That makes me smile.

Each of us has to do a better job. We’re doing a lot, but we’re outnumbered at the moment. However, I love to point out, we own the Internet, folks under 30, who are less inclined to be religious. They’re more inclined to be pro-same gender marriage.

I’m going to surround myself with people who aren’t hateful, who understand the way things are. I’m really excited that we have a legislator here [Arizona Rep. Juan Mendez]. We need to take a page out of that Christian Right handbook. We need to be running candidates. We need people to get in there at town halls and wear our flair and T-shirts: “I am secular and I vote,” that’s an important one. We need to be asking questions of our politicians.

I can’t remember, if you can help me on this? The Louisiana legislator who was all pro-voucher and then realized, “Oh my God, a Jew could get this money too, oh no! I’m not for that!” She didn’t want it to go to a Muslim school, but Christian schools, it was just fine. [Rep. Valarie Hodges, R-Watson, said later she regretted her vote.]

I am delighted to be here. FFRF is doing some amazing work and it’s getting noticed. I’m honored that you had me here today. Thank you very much!

Q. I know that you’re funded by the Russians. How do you feel about Vladimir Putin and the “homosexual propaganda” situation?

A. Yes, the station that I work for is funded in part by the Russian government. The reason I was hired is because I’m an expert in American politics. I’m trained as a health reporter. I’m good in live, breaking news situations. They hired me for my particular skill set. I of course don’t support [Putin’s anti-gay views] or that members of Pussy Riot were jailed for blasphemy.

My bureau is three blocks from the White House. I defend the First Amendment. When Chelsea Manning announced to the world who she was, I had two experts from the Human Rights Campaign on my show to talk about how we talk about transgender issues and rights. My employer is never going to dictate or mandate my ethics or morals to me.

Q. Last night, we went to dinner and as we walked out of the hotel, there was a man there with a sign that said, “God loves you atheists.” I wanted you to share with the audience your response when he asked, “What state are you from?”

A. Hah! I have a firm policy. I do not engage with the idiots until after I’ve done my speaking. I need my intellect and energy for the crowd, but it just flew out! I just couldn’t stop myself, so I said, “I live in the state of reality!”

Q. Do people have a right to pray in schools and at work?

But I like conflict. I love confrontation. I love “going there,” because there is where the fun happens for me. But yeah, it’s madness.

Q. I would imagine you must have come from a religious background. The question is then, what did you have to go through to become the person you are?

A. I started doing stand-up comedy by talking about my family, and people thought I was doing material, and I going “I’m not being funny, I’m telling you the truth.” My father was raised as a Black Muslim, a follower of Elijah Muhammad in Pittsburgh in the mid-1950s. My mother was a Southern Baptist, “submit unto your husband, Jesus will stop him from beating you when it’s appropriate” type.

She converted to Catholicism about when it was time for me to go to Catholic school and get that discount. Many of my friends in school were Jewish. I went to a scholars program where there were a couple of Orthodox Jewish kids. By the time I was 7, I realized that nobody knew what the hell they were talking about, and they were making up crap as they went along.

I’ve always been loud and obnoxious, I cannot have a thought that I don’t express, and if it’s a question, it burns until I get it out. It was hard, growing up. I have a second-grade teacher, who’s still friends with my mom, who swears that the only difference in me then and now is that now I’m taller and have a baby.

Yeah, I’ve been pissing people off since I was embryonic. According to Mom.

Q. I’m wondering how we can get more politicians who are on our side in Washington?

A. I can’t answer that in the time I have. But, I had a lovely exclusive interview last week with Sen. Ernie Chambers [1983 Supreme Court victor in Marsh v. Chambers]. Give it up for Ernie Chambers! He’s been called the scariest man in Nebraska. They changed the state constitution and instituted term limits after his 38th year of service. It’s been two years and now he’s back. He says there’s no way that anybody who speaks honestly the way he does, and who believes in the rights of his constituents to be served as he does, can get on the national stage. There’s too much money.

The way elections happen, I fear that Mr. Chambers is right. I think that the political system would do well with somebody like me. No way in hell can I be elected as things stand today. No way, no way. We need to change that.

Jamila Bey also writes for The Washington Post blog “She the People” and worked as a producer and editor for a decade at National Public Radio. She’s currently writing a book on the role religion plays in the lives of African-American women.