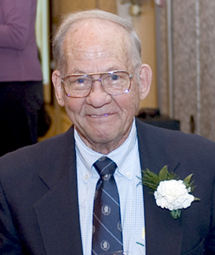 Paul Joseph “Jody” Gaylor Jr., 84, Madison, Wis., who was married to Freedom From Religion Foundation President Emerita Anne Nicol Gaylor, died May 5, 2011, from cancer of the brain. The terminal illness was diagnosed in October 2010.

He was born Aug. 30, 1926, in Springfield, Mo., the eldest of three children of Paul Joseph Gaylor Sr. and Irma Fairman Gaylor.

A World War II U.S. Navy veteran, he graduated from Drury College in Springfield in 1948 and did graduate work at the University of Kansas City. He and Anne met in Kansas City. He was active in athletics, especially boxing. He married Anne Nicol on Dec. 29, 1949, in Springfield. They moved to Madison in 1952.

He was publisher of the Middleton Times-Tribune, a weekly newspaper, in the 1960s and was vice president for many years of a building maintenance company in Madison. He served as an FFRF officer for many years, and was still a board member.

Jody was one of six plaintiffs in FFRF’s historic federal challenge of the National Day of Prayer. As a plaintiff, Jody entered into the court record his distaste for prayer and for the Sunday morning hypocrisy by racist deacons at the segregated worship services at the Church of Christ he attended. He always said religion “never took” with him, even as a small child. He was forced to submit to a full baptism immersion at age 12 in front of his congregation, an affront he never forgave. His standard line, when asked if he believed in God, was to reply, “No, but I believe in the fool catcher.”

After retirement, he took over household duties. He was a skilled cook and baker and presided over special “family dinners,” as well as functions of FFRF and the Women’s Medical Fund, the abortion fund charity co-founded by Anne Gaylor, which has helped nearly 20,000 women. He loved to serve his frosted brownies and other specialties. Jody tested many of the recipes appearing in FFRF’s World Famous Atheist Cookbook, and several of his recipes are included in it.

He served for more than two decades as FFRF’s principal volunteer — picking up and sorting mail, filling sales orders, chauffeuring his wife to numerous FFRF functions, doing errands and building repair and often surprising staff and volunteers with freshly baked cookies. He was principal photographer at FFRF events for its first two decades, taking convention and other photos appearing in FFRF’s original newsletter and then in Freethought Today. He also served as volunteer photographer for The Feminist Connection, the monthly newspaper that his daughter Annie Laurie edited and published from 1980-84. 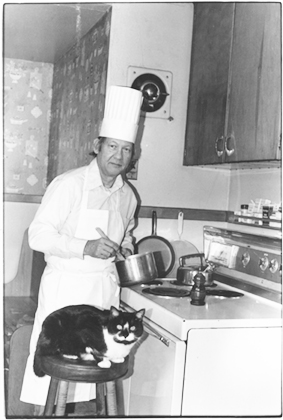 Testing recipes, with Atticus perched on a chair, for The World Famous Atheist Cookbook in the late 1980s.