Hundreds of people had lined up by 8 a.m. to attend the 10 a.m. oral arguments before the U.S. Supreme Court on Feb. 28--in the Freedom From Religion Foundation's closely-watched lawsuit, reckoned as one of the more interesting of the session.

Hein v. FFRF involves the Bush administration's attempt to revoke the right to sue ("standing") of the Foundation's taxpayer plaintiffs, over the creation of the faith-based offices at the White House and cabinet levels.

The administration argues that since Bush created the offices by fiat, using general Congressional appropriations, the violation does not involve the Congressional "taxing and spending" clause in the Constitution--a necessary ingredient in taxpayer standing under Court precedent.

The Foundation argues that Congress has knowingly funded the faith-based federal bureaucracy, costing taxpayers into the multimillions. It argues that violations establishing religion at the executive branch, which is dependent on Congressional funding, must be subject to court scrutiny. If taxpayer standing is denied, there is no way to remedy the egregious violation.

Solicitor General Paul Clement, under close questioning, shockingly argued that taxpayers do not have standing to sue over almost all executive-branch establishments of religion. Clement denied taxpayer standing in the following hypothetical instances:

If Congress had specifically designated funding to create the faith-based federal centers;

If Bush used general appropriations to build a "government church."

If money were given to a religious organization to build a church by Congress. (Scalia, leading this line of questioning, surprisingly, responded: "as far as the establishment clause violation, I find it difficult to understand the difference between the two.")

(Justice Souter responded: "If you start with the Madisonian view [not to expend "threepence" from the pocket for a religious purpose], there should be no distinction of the two cases that Justice Scalia puts.")

If, as Justice Breyer proposed, Congress passed a law to commemorate the Pilgrims by building a government church at Plymouth Rock, "where we will have the regular worship in the Puritan religion. Now can a taxpayer from California in your view challenge that?" No, Clement responded.

If, as Breyer persisted, in proposing the "most amazing" hypothetical he could think of (to audience laughter): "All over America, they build churches dedicated to one religion; and Congress passes a statute and says in every city, town, and hamlet, we are going to have a minister, a government minister, a government church, and dedicated to the proposition that this particular sect is the true sect; and they pass a statute like that, nobody could challenge it?"

Clement said, "There would not be taxpayer standing."

Chief Justice Roberts jumped in to rescue Clement, proposing that someone who went to another church could sue, citing discrimination, a notion which Breyer did not buy.

The only hypothetical instance in which Clement agreed to standing was Judge Kennedy's posed question about a federal statute creating the conferences, with money going for air tickets "to various religious ministers and priests."

Justice Ginsburg noted for the record that the Foundation's case is not similar to the Valley Forge case, in which taxpayer standing to challenge a state/church violation was thrown out by the high court. She observed that the argument was based on the Constitution's property clause, not the Congressional taxing and spending clause cited in Flast v. Cohen (1968). Flast carved a right for taxpayers to sue over Establishment Clause violations, and is the prevailing precedent relied on by the Foundation in its argument.

"So what's wrong with just saying that Flast stands for the proposition that when the Government spends money in violation of the Establishment Clause, a taxpayer. . . can bring a lawsuit? And the reason that they do that is because the establishment clause is an important joint part of the religion clauses; and there be no other way to bring such a challenge. . . .

"Because there is a real case or controversy, because people become terribly upset when they see some other religion getting the money from the state for the--for building a church, for example, and that's why: There's a real controversy."

Scalia replied: "Getting upset is a constitutionally adequate reason to bring a lawsuit?"

Andy Pincus, of Mayer, Brown, in D.C., argued the case for the Foundation pro bono, representing the Yale Law School Supreme Court Advocacy Clinic. Rich Bolton, who has taken the Foundation's many faith-based challenges in federal court, and won five--with four additional ongoing challenges in the courts, also sat at the table as attorney of record.

"The government's argument here is that Flast needs major surgery, and . . . is proposing two very substantial limitations that bear no relation to the relevant Establishment Clause principles, the history of the clause, or the history of this Court's decision. And we think there's no basis for drawing the arbitrary lines that the government suggests."

He was immediately interrupted by Chief Justice Roberts, and Justices Scalia and Alito, with picayune dissections of whether, if the White House faith-based office could be challenged, then the use of Air Force One to take the president to church could be challenged, etc.

Pincus said that the injury "is not an increased tax burden. The injury is the expenditure of funds in a way that violates the Establishment Clause."

Pincus postulated, among interruptions, a "discrete and identifiable expenditure that only arises with respect to religious activities," and a second question of whether that "particular expenditure [is] an incidental one. Flast said incidental expenditures don't give rise to standing." 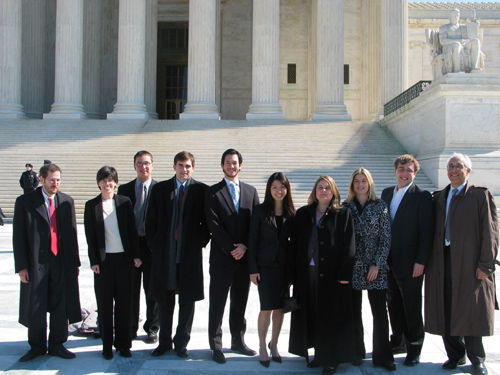 "But I'd started thinking of the question of standing by thinking that there are strong feelings when the government spends money in favor of one religion and not another. After all, they led to the 30 Years War. We see that in other places in the world today. People feel strongly. And if, in fact, they have that terribly strong feeling and can't make any challenge because the feelings are shared by many, then there are no cases in the courts at all, and the government can do what it wants without challenge.

"So in Flast, they carved out an exception, and the exception was where the taxing and spending clauses were involved, because Madison and others said this is aimed at 'Government shall not tax and spend' [to establish religion]. So that was my theory. And all we're saying is where there's a big taxing and spending and it isn't incidental, there's standing."

"It seems to me unduly intrusive for the courts to tell the President that it cannot talk to specific groups to see if they have certain talents that the Government may use to make sure that all of their energies are used properly by the Federal Government.

"It's almost like a speech rationale. . . it seems to me that there's a standing concern here, too, that we would be supervising the White House and what it can say, . . . who it can talk to. And it seems to me that's quite intrusive from the standpoint of standing purposes."

Then Chief Justice Roberts said, point blank: "There are not a lot of these challenges because you don't have standing under Flast."

Pincus attacked the Administration's argument that taxpayers would only have standing if the Executive Branch was itself directly funding faith-based groups.

"The Government could hire a corps of chaplains and send them out to civilians and to the populace at large and that couldn't be challenged, because all it is is executive pay.

"It's an Executive Branch decision to use funds in a way that's impermissible under the establishment clause, and we've been drawing the lines that the Government has been trying to draw . . . to insulate from any taxpayer challenge really huge swaths of conduct that is really at the very core of what Madison was concerned about. . .

"It's the spending of the same threepence, and if history indicates anything it's that concerns about establishment were focused just as much on the King as on the Parliament in terms of the history that the framers understood.

"And for the idea that the executive would be given free rein to exercise discretion with respect to spending and there would be no concern about the types of injuries that gave rise to Flast, we think is just not right."

During his five-minute rebuttal, Solicitor General Paul Clement ended on a bald suggestion that Flast v. Cohen be overturned.

If the Foundation prevails before the Supreme Court, its faith-based challenge, filed in 2004, will return to district court so the merits can be (finally) argued.

The high court theoretically could overturn Flast v. Cohen, thereby denying taxpayer standing of state/church challenges, chilling much Establishment Clause litigation. Or it could rule that Flast's parameters do not apply to the Foundation lawsuit, which would throw out FFRF's challenge, but less broadly impact taxpayer challenges of state/church violations.