There are 4 entries for this date: William Pitt , Gora , George Hahn and Ed Asner 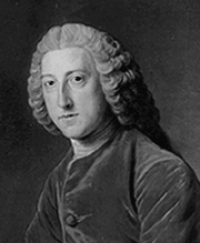 On this date in 1708, William Pitt, statesman and the first Earl of Chatham, was born in England. Educated at Eton and Oxford, he entered Parliament at age 27 in 1735. After one of his speeches in 1736 offended the king, Pitt was dismissed from the army. He continued eloquent calls for reform in the House of Commons, served in several prestigious posts and in 1756 was named leader of the House. Pitt, known as "the Great Commoner," was England's most powerful politician by 1760 and was known for his honesty. (He's also referred to as Pitt the Elder to distinguish him from his son, William Pitt the Younger, who also was a prime minister.)

Pittsburgh, Pennsylvania, was named for Pitt, who served as prime minister during the Seven Years' War against the French in the colonies. He argued in Parliament against the Stamp Act and introduced many measures to placate the Americans, which were all voted down, such as recalling British troops from Boston. Pitt advised, "You cannot conquer the Americans." The king consequently called him "a trumpet of sedition."

Pitt was believed by some to be author of an unsigned "Letter on Superstition" published in the London Journal in 1733 and reprinted with his name in 1873. It called for a "religion of reason." Biographer Basil Williams in his Life of William Pitt (1913) disputed that claim. Yet Williams' research found that Pitt was a deist with "a simple faith in God," who wrote a "fierce denunciation" of those with a "superstitious fear of God."

There is agreement Pitt had no ministration from the church on his deathbed in 1778. "Lord C[hatham] died, I fear, without the smallest thought of God," recalled William Wilberforce, a friend of Pitt's son (Correspondence of William Wilberforce, 1840). Pitt, who suffered from gout most of his life, collapsed at age 70 during debate on granting independence to the colonies, which he opposed, and died shortly thereafter.

"[A]theism furnishes no man with arguments to be vicious; but superstition, or what the world means by religion, is the greatest possible encouragement to vice, by setting up something as religion which shall atone and commute for the want of virtue." 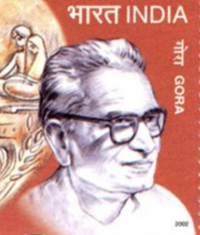 On this date in 1902, Goparaju Ramachandra Rao, the Indian atheist leader known as Gora, was born into a high-caste Hindu family. He wrote in his autobiography, We Become Atheists, that he grew up "conventionally orthodox and superstitious." He pursued a botany degree, eventually earning his master's in botany at Presidency College in Madras. He and his wife Saraswathi were married in 1922 when she was only 10. Both their families were Orthodox Hindu, which dictated that girls must marry before puberty, until the Child Marriage Restraint Act was passed in 1935.

Gora was excommunicated by his family for his atheism and devoted his life to propagating it. In 1940 he and his wife co-founded the Atheist Centre in a small village in the Krishna district. On the eve of Independence in 1947, they moved it to Vijayawada. Gora wrote many books, including Atheism Questions and Answers, An Atheist Around the World, An Atheist with Gandhi, The Need of Atheism and Positive Atheism. From 1949 on he wrote a column on atheism and began publishing The Atheist, a monthly, in 1969.

The Goras organized the first "beef and pork friendship" gathering in 1972 to foster social cohesion. Among the hundreds who gathered, 138 people ate beef and pork together, including atheists, Hindus, Muslims and Christians.

His atheism dictated his campaign to abolish the caste system with its "untouchables" and the idea of "karma" or divine fate. The Atheist Centre provides counseling, promotes intercaste and casteless marriages (more than 500 have taken place there), works to abolish child marriages, provides aid to vulnerable women, educates against belief in witchcraft and sorcery and promotes sexual education and family planning. After Gora died in 1975, Saraswathi directed the center until her death in 2006. They had nine children.

“The greatest contribution of atheism is the provision of a firm basis for ethical conduct. Atheism explains that morality is a social obligation but not a passport to heaven and salvation. The theistic belief in divine retribution sidetracked moral behavior. Believers were more prone to please the god of their imagination by prayer and ritual than to conform to rules of moral conduct." 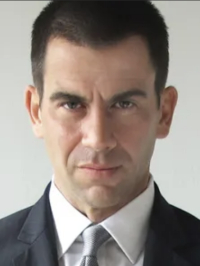 On this date in 1970, media personality George Hahn — fashion maven, writer and former actor — was born to Lynda and George Hahn in the Cleveland suburb of Lakewood, Ohio, where he grew up and attended Catholic grade school and a Jesuit high school.

He studied advertising design and layout at Boston College, another Jesuit school, where he got involved in theater and decided to accept and stop hiding that he was gay. "I was a classic Catholic closet case, tightly wrapped in fear, guilt and shame. If anything or anyone came close to exposing me and my proclivity, I’d do what many do: run and shun." (blog, April 29, 2020)

After graduation he worked in Boston and New York as a hair salon receptionist, night club personality and actor. "My cousin Kathryn Hahn eventually joined me behind the reception desk where we both charged New York’s wealthiest Prozac-stoned women thousands of dollars for highlights, bang trims and manicures that didn’t make them look any younger." (Ibid.) Kathryn went on to star as grief counselor Lily Lebowski in the NBC crime series "Crossing Jordan," launching a successful acting career.

Hahn garnered connections forged in salons, as a waiter and on "both sides of the bar" into landing minor TV roles in episodes of “Sex and the City” and “Law and Order: Criminal Intent” and in the 2001 movie “Kate & Leopold.” From 2004 to 2012, he owned and operated a graphics and web design business focusing on entertainment. He used his comedy skills to work as social media director for Joan Rivers. In 2011 he had launched georgehahn.com "as the blog that I wanted to read: a journal designed for men who weren’t millionaires, but who also wanted to look good and live well."

"How George Hahn, Urban Raconteur, Spends His Sundays" said the headline on a New York Times feature story (April 16, 2021), detailing that he has over 128,000 followers on Twitter, including entertainers Jane Lynch and Wanda Sykes.  "But he still has his day job — as a patient concierge for a cosmetic dermatologist," the story said, adding that Hahn lives with his dogs Smokey and Lenore in a 360-square-foot converted hotel room in Manhattan. He became a correspondent for the syndicated TV newsmagazine "Extra" in 2021.

Hahn, who is gay, mused in one blog about how his father would have come to terms with his sexuality: "He was a somewhat conservative guy, and I always sought his pride and approval. But if the Catholic construct of heaven does exist, then he is in an enlightened and loving state of grace with everything."

He got tougher on religion in a tweet about a petition drive to remove U.S. Rep. Marjorie Taylor Greene from Congress: "If I believed in god, I’d pray for this freak’s removal. My belief in freedom *from* religion (and cults) leaves me to rely on people with reason to get their shit together and get rid of this nut bag so we can get on with a more effective government." (Twitter, Jan. 29, 2021)

"Can we get back to the fight against religious psychos who think it’s appropriate to impose their will and their reign of terror onto women?"

—Hahn tweet after a SCOTUS draft opinion on abortion was leaked (May 4, 2022) 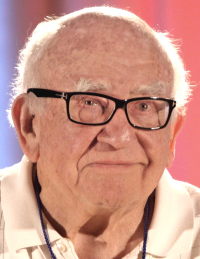 On this date in 1929, actor Edward (né Etye) Asner was born in Kansas City, Mo., to Lizzie (née Seliger), a housewife, and Morris Asner, who ran a junkyard and secondhand shop. His Orthodox Jewish parents were born in Russia.

Asner didn't like Judaism as a child, feeling it alienated him from his peers in public school when he wanted to be "the regular Joe that everybody else was. I resented it and wanted to put it behind me as fast as I could." (Fox News interview, Nov. 15, 2012)

After attending the University of Chicago from 1947-49, he worked on the assembly line for General Motors and served with the U.S. Army Signal Corps in Europe. He helped found the Playwrights Theatre Co. in Chicago before moving to New York City. His first Broadway role in "Face of a Hero" alongside Jack Lemmon was in 1960 and he started to make inroads as a television actor. His film debut in 1962 was in the Elvis Presley vehicle "Kid Galahad."

Asner was best known for his character Lou Grant, a crusty news editor on "The Mary Tyler Moore Show" in 1970 and later spun off on the "Lou Grant," "Rhoda" and "Phyllis" series. He had nearly 400 acting credits and is the most honored male performer in the history of the Primetime Emmy Awards, having won eight, including five for portraying Grant and two for TV mini-series: "Rich Man, Poor Man" (1976) and "Roots" (1977). He served two terms as Screen Actors Guild president from 1981-85.

At age 82 in 2012, Asner returned to Broadway after a 23-year absence, joining the cast of "Grace," a play starring Paul Rudd as a religious idealist trying to open a chain of Gospel motels in Florida. Asner played a gruff exterminator. In 2013 during his one-man show "FDR" in Indiana, he was rushed to the hospital and diagnosed with exhaustion.

In 2018 he started playing the title character in a touring stage production of the political comedy "God Help Us!" in which he used his "divine" judgment to moderate a heated exchange of ideas between characters Randi and Larry. It could be presented either with a veteran cast or with local actors playing Larry and Randi. Asner played God. When the show played in December 2019 in Madison, Wis., Asner visited FFRF's headquarters to be a guest on its TV show "Freethought Matters."

Asner was married to Nancy Sykes from 1959-88 and they had three children: Kate and twins Matthew and Liza. In 1987 he had a son, Charles, with Carol Jean Vogelman. He married producer Cindy Gilmore in 1998 after a seven-year engagement. They divorced in 2015.

Asner was a parent and grandparent of children with autism and was actively involved with the nonprofit group Autism Speaks. He published "The Grouchy Historian: An Old-Time Lefty Defends Our Constitution Against Right-Wing Hypocrites and Nutjobs" in 2017. In 2018 he announced the creation of the Ed Asner Family Center to support differently abled people.

His death at age 91 was announced on his official Twitter account: "We are sorry to say that our beloved patriarch passed away this morning peacefully.  Words cannot express the sadness we feel. With a kiss on your head — Goodnight dad.  We love you." (D. 2021)