Atheism The Case Against GodThe Power Worshippers
Back to: Books 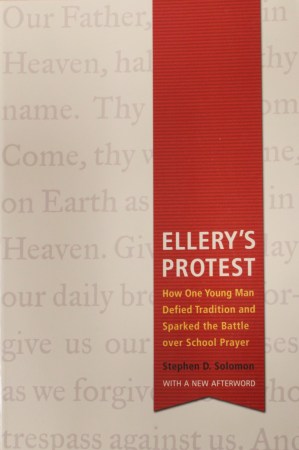 Great legal decisions often result from the heroic actions of average citizens. Ellery’s Protest is the story of how one student’s objection to mandatory school prayer and Bible reading led to one of the most controversial court cases of the twentieth century—and a decision that still reverberates in the battle over the role of religion in public life.

Abington School District v. Schempp began its journey through the nation’s courts in 1956, when sixteen-year-old Ellery Schempp protested his public school’s compulsory prayer and Bible-reading period by reading silently from the Koran. Ejected from class for his actions, Schempp sued the school district. The Supreme Court’s decision in his favor was one of the most important rulings on religious freedom in our nation’s history. It prompted a conservative backlash that continues to this day, in the skirmishes over school prayer, the teaching of creationism and intelligent design, and the recitation of the Pledge of Allegiance with the phrase under God.

Author Stephen D. Solomon explores the political, cultural, and religious roots of the controversy. Contrary to popular belief, liberal justices did not kick God out of the public schools. Bitter conflict over school Bible reading had long divided Protestants and Catholics in the United States. Eventually, it was the American people themselves who removed most religious exercises from public education as a more religiously diverse nation chose tolerance over sectarianism. Ellery’s Protest offers a vivid account of the case that embodied this change, and a reminder that conservative justices of the 1950s and 60s not only signed on to the Schempp decision, but strongly endorsed the separation of church and state.