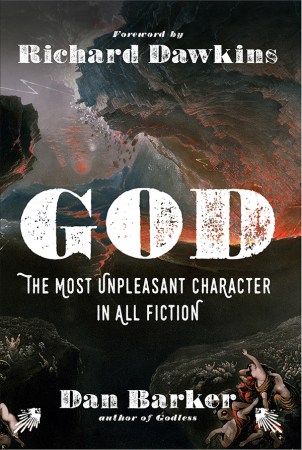 The Most Unpleasant Character in All Fiction

English ethologist, evolutionary biologist, and writer Richard Dawkins opens Chapter 2 of his New York Times bestseller The God Delusion by saying that the God of the Old Testament is "arguably the most unpleasant character in all fiction" and goes on to list nineteen negative character traits. Now, in God: The Most Unpleasant Character in All Fiction, Dan Barker, a former ordained minister and current atheist, proves that Dawkins was right.

God: The Most Unpleasant Character in All Fiction contains verses from all thirty-nine books of the Old Testament. In Part I, “Dawkins was right,” Barker begins each chapter with his own commentary on one or two biblical stories that Barker and Dawkins have chosen to illustrate a characteristic on the list. A series of selected verses (and sometimes Barker's personal remarks) follow. Part II, “Dawkins was too kind,” ends the book with eight chapters that expand on the original list as well as a final chapter that extends the list into the New Testament.