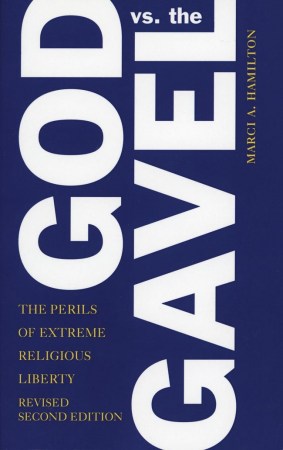 God VS The Gavel DISCONTINUED

The Perils of Extreme Religious Liberty.

Clergy sex abuse, polygamy, children dying from faith healing, companies that refuse to do business with same-sex couples, and residential neighborhoods forced to host homeless shelters - what do all of these have in common? They are all examples of religious believers harming others and demanding religious liberty regardless of the harm. This book unmasks those responsible, explains how this set of rights is not derived from the First Amendment, and argues for a common-sense religious liberty.

In a straightforward, readable prose, God vs. the Gavel sets the record straight about the United States' move toward extreme religious liberty. More than half of this thoroughly revised second edition is new including the introduction, epilogue and contemporary stories. All Americans need to read this book, before they or their friends and family are harmed by religious believers flexing the rights they have illegally obtained.