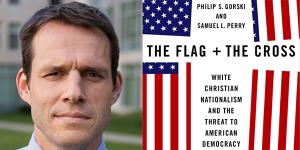 Published in Freethought Radio
Tagged under
More »
May 19, 2022 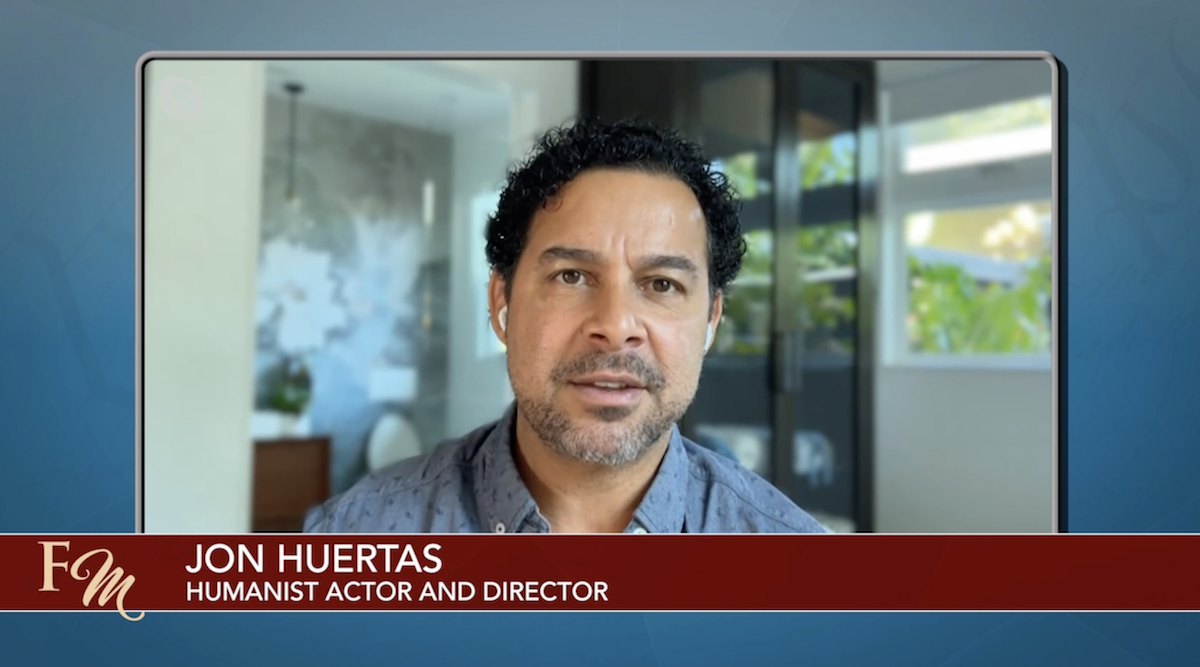 Acclaimed actor and nontheist Jon Huertas, who has played key parts in memorable TV serials, is the guest on the Freedom From Religion Foundation’s “Freethought Matters” TV show this Sunday.

For the past six seasons, Huertas has starred as Miguel Rivas on NBC’s critically praised award-winning series “This Is Us.” Audiences also know him as the tough but affable detective Javier Esposito on ABC’s hit dramedy “Castle” and from “Sabrina the Teenage Witch.” Huertas gave a standout performance as Sergeant Tony “Poke” Espera in the HBO miniseries “Generation Kill,” which he calls the most meaningful role of his career because he’s a veteran himself (he served for eight years in the Air Force). In addition to his 27-year acting career, Huertas is a filmmaker who has formed the production company In Development.

“Nontheist or humanist is usually what I call myself,” Huertas tells “Freethought Matters” co-hosts Dan Barker and Annie Laurie Gaylor. “Religion gives people an out so they don’t take responsibility for the good that they do in their lives to cause good in their lives or when something not so good happens in their lives, that they can blame it on something else other than maybe their own actions or just chance. Humans are better than we give ourselves credit for. We have it in us to solve world hunger, to keep the planet from destroying itself.”

As a special treat, the show is broadcasting a short recording of Huertas’ meaningful remarks at a Secular Day of the Dead event.

If you don’t live in the quarter-plus viewership of the nation where the show broadcasts on Sunday, you can already catch the interview on the “Freethought Matters” playlist on FFRF’s YouTube channel. New shows go up every Thursday through the end of the spring season. (In June, the show goes on hiatus until the first Sunday in September.) You can also receive notifications when we post new episodes of “Freethought Matters” by subscribing to FFRF’s YouTube channel.

Four attorneys from three major secular organizations are launching today, May 18, the only legal affairs show for atheists, agnostics and humanists hosted completely by women lawyers.

“We Dissent” will discuss religious liberty in federal and state courts and the work these attorneys do to keep religion and government separate. The co-hosts are Rebecca S. Markert, legal director at the Freedom From Religion Foundation, Elizabeth Cavell, associate counsel at FFRF, Alison Gill, vice president for legal and policy at American Atheists, and Monica Miller, legal director and senior counsel at the American Humanist Association. The podcast began taping episodes in January, so there’ll be a few more dropping on Wednesdays for the next couple of weeks, but then it’ll be once a month starting in June.

In the first episode, Cavell, Markert, Gill and Miller discuss the “sleeper case” of the Supreme Court term that could upend prohibitions on government funding to religious schools. The lawyers break down the arguments from the voucher case out of Maine, Carson v. Makin, and discuss ramifications and potential outcomes. Cavell acts as the “showrunner” for this first episode — she did the background research, outlined the episode and was the main host. Each episode will have a co-host acting as the showrunner for the particular issue and will rotate through the organizations.

In the second episode, the four co-hosts review Shurtleff v. City of Boston, in which the city of Boston denied a religious organization, Camp Constitution, its request to fly the Christian flag at city hall. The hosts discuss the free speech and religion clause arguments presented at oral arguments last December. Note: This episode was recorded prior to the Supreme Court handing down the decision on May 2. An update to this episode is forthcoming.

In the third episode, Gill, Markert and Miller discuss another tool in the kit to keep religion and government separate: legislative advocacy. As the resident policy expert, Gill guides us through the many bills wending their ways through state legislatures this year that threaten church/state separation.

The podcast will hence explore religious liberty cases currently before the U.S. Supreme Court and at other federal courts across the country. The attorney hosts will also discuss other advocacy work undertaken to help atheists and other nonreligious people outside the courtroom.

Markert is elated that she’s played a key role in putting together such a distinctive podcast.

“I’m really excited how this all came together. We wanted to highlight the fact that there are so many powerful secular women doing a lot of the work to keep religion out of government,” says Markert. “Women lawyers have prominent roles in our national organizations and their voices deserve to be heard.”

The co-hosts thank FFRF staff members James Phetteplace and Greta Martens for their production support and work in helping get “We Dissent” off the ground.

We Dissent is available wherever you get your podcasts. The podcast’s website is we-dissent.org. You can also keep up to date with We Dissent on Facebook by clicking here or follow us on Twitter @we_dissent.

Tune in — starting now — for an incisive podcast that offers a fresh legal critique from a particular perspective.