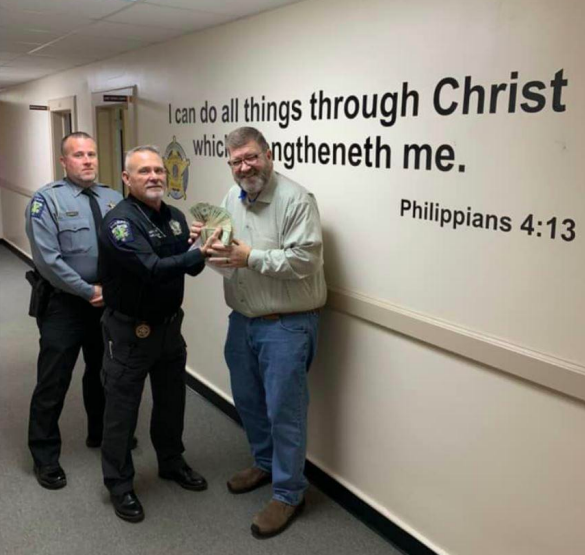 A North Carolina sheriff’s office must take down a massive display of a devout New Testament slogan emblazoned on its wall, the Freedom From Religion Foundation is demanding.

The Columbus County Sheriff’s Office has a large bible verse with the citation, “I can do all things through Christ which strengtheneth me. Philippians 4:13,” on display in its building, a concerned resident has informed the state/church watchdog. It can be seen in the image above.

“The Supreme Court has said time and again that the ‘First Amendment mandates government neutrality between religion and religion, and between religion and nonreligion,’” FFRF Staff Attorney Chris Line writes to Sheriff Jody Greene. “The court has also ruled, ‘The Establishment Clause, at the very least, prohibits government from appearing to take a position on questions of religious belief.’ Like the Ten Commandments posters in county buildings in McCreary (2005) and the crèche display on county land in Allegheny (1989), this bible verse display promoting Christianity in a sheriff’s office building is correctly viewed by a reasonable observer as an endorsement of religion, and is therefore unconstitutional.”

Additionally, federal courts have upheld restrictions on the display of religious materials by government employees on government property because such restrictions exist to avoid Establishment Clause violations. The 9th U.S. Circuit Court of Appeals has stated that the “government has a greater interest in controlling what materials are posted on its property than it does in controlling the speech of the people who work for it.”

The Columbus County Sheriff’s Office is meant to serve all citizens regardless of belief or nonbelief, FFRF emphasizes. Over one-third Americans are non-Christians, and this includes the more than one in four Americans who now identify as religiously unaffiliated. The message that is up in the sheriff’s building alienates this huge portion of the American population.

FFRF is urging the Columbus County Sheriff’s Office to recognize its obligation to provide all citizens with an environment free from religious endorsement by removing this exclusionary display.

The Freedom From Religion Foundation is a national nonprofit organization with more than 35,000 members and several chapters across the country, including almost 800 members in North Carolina and a state chapter, the Triangle Freethought Society. FFRF protects the constitutional separation between state and church, and educates about nontheism.