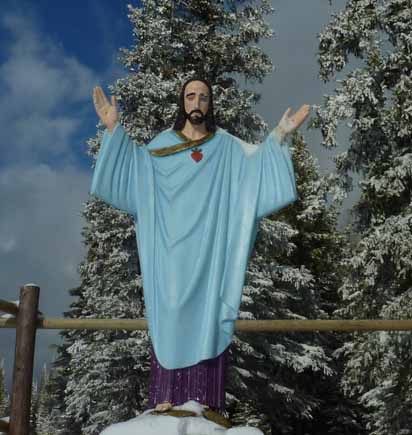 The Freedom From Religion Foundation, a state/church watchdog and the nation's largest association of atheists and agnostics, has filed suit in U.S. District Court in Montana, challenging the Forest Service's decision to renew a special permit to maintain a Jesus shrine on federal property in the Rockies.

The case was filed late yesterday on behalf of FFRF's 17,500 members, including more than 100 in Montana and those "who have had direct and unwanted exposure to the shrine" on Big Mountain near Whitefish Mountain's Resort Chair Two in Flathead National Forest.

FFRF seeks a declaration that the "continued presence of a six-foot-tall statue of Jesus Christ in the Flathead National Forest, on a 25-by-25-foot plot owned and administered by the United States Forest Service, violates the Establishment Clause of the First Amendment to the Constitution of the United States."

The Knights of Columbus, an ultra-conservative Roman Catholic men's organization, applied for a permit for the express religious purpose of erecting "a Statue of our Lord Jesus Christ" in 1953. The shrine, which was first placed in 1954, is similar to Jesus shrines the Knights of Columbus places "on its own extensive real estate holdings." The Knights of Columbus has never paid any money for the privilege of appropriating a prominent parcel of federal land for their proselytizing symbol.

The Forest Service has continued to "sanction the looming presence" of the shrine overlooking Big Mountain ski run, until the most recent lease ran out in late 2010.

Chip Weber, Flathead National Forest Supervisor, determined last year, after a complaint by FFRF, that the statue's presence was inappropriate. On Aug. 24, 2011, Weber noted in a formal statement that a shrine on federal land conflicted with Supreme Court decisions and established case law, and that it would be removed no later than Oct. 31, 2012.

U.S. Rep. Denny Rehberg, who is campaigning for the Senate, publicly denounced the decision and started a website, vetsforjesus.com, which takes visitors to his Congressional website and a pitch to retain the shrine. Weber capitulated in an Oct. 21 announcement, withdrawing the earlier decision, and calling for a public comment period. Weber's letter referred to "new information" that the Jesus statue is supposedly eligible for listing on the National Historic Register — a suggestion the Forest Service itself made to the Montana Historic Preservation Office. Religious monuments and properties are not eligible for listing on the National Register of Historic Places.

As part of the "public comment" period, FFRF shared samples of the vicious hate mail it has received from shrine supporters. FFRF's legal complaint notes that the shrine's presence on federal property amounts to governmental endorsement of Christianity in general and Roman Catholicism in particular. The Forest Service's actions "diminish the civil and political standing of non-religious and non-Christian Americans."

FFRF is asking the court to enjoin the defendant from continuing to approve the shrine for federal property and ordering Weber to direct the Knights of Columbus to remove it.

FFRF v. Weber is FFRF's second lawsuit in Montana. In October 2004, FFRF, in a case brought by Bolton, won a federal challenge finding unconstitutional a "faith-health cooperative" run by the Montana Office of Rural Health in cooperation with the Montana Association of Churches.

FFRF's case was assigned to U.S. District court Judge Dana Christensen, who was confirmed as an Obama appointee in December 2011. He has practiced in the Kalispell area since 1977.