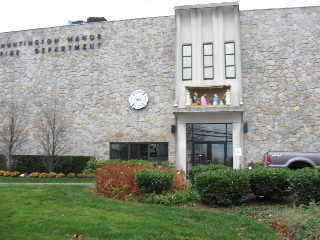 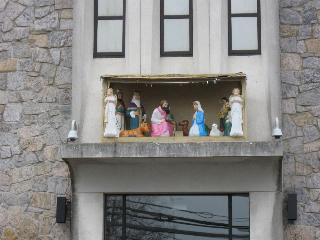 A Christian nativity scene at the entrance to a municipal fire station in Huntington Station, N.Y., was removed after the Freedom From Religion Foundation notified the Board of Fire Commissioners it had received a complaint from one of its New York members. (Huntington Station is on Long Island.) Freethinker Walt Whitman was born nearby in the Town of Huntington.

The Foundation's complainant noted that the creche is erected every year and has been for about 10 years from around Thanksgiving to mid-January. In the Foundation's Dec. 15 letter, attorney Rebecca Kratz Markert noted that courts have consistently ruled it's unlawful for a public entity "to maintain, erect, or host a holiday display that consists solely of a nativity scene, thus singling out, showing preference for, and endorsing one religion. The Supreme Court has ruled it is impermissible to place a nativity scene as the sole focus of a display on government property."

And, the letter added, displaying "an inherently Christian message on town property right above the entrance to a government building unmistakably sends the message that the Huntington Manor Fire District endorses the religious beliefs embodied in the display."

On Dec. 18, Louis Agiesta, Board of Fire Commissioners chairman, wrote the Foundation to say, somewhat ungraciously, that the nativity scene would come down. "How anyone can be offended by a display that stands for the concept of peace earth and goodwill to men escapes us, but we have nevertheless seen to it that the display is removed and that staff should consider a more neutral theme for 2010."

Annie Laurie Gaylor, Foundation co-president, said, "A nativity scene is not a symbol of peace. More people have died in the name of religion than for any other reason, and many of them in the name of Christianity.

"We have no objection to nativity scenes on private property, but of all places, a public fire station that serves people of all faiths or of no faith should be neutral about religion," Gaylor said.

"We will have true peace on Earth and good will toward all when we get religion and its dogma out of all government," she added.