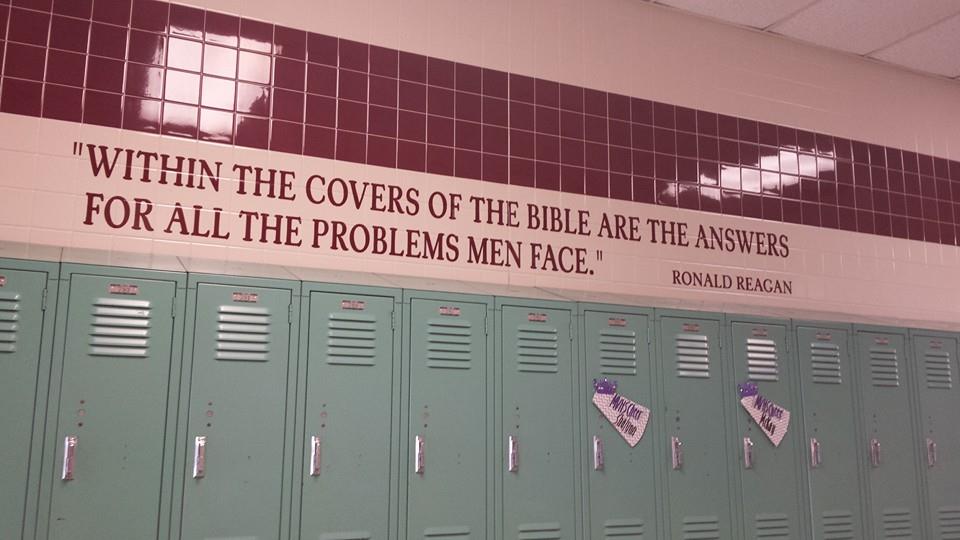 Mount Vernon Independent School District in Texas should remove quotations on its school walls that "unconstitutionally endorse religion," the Freedom From Religion Foundation contends in a letter sent last week.

At least seven bible quotes are posted on the walls of schools in the MVISD, among over 130 quotes put up by the district in 2011. The district has also posted the quote, "Within the covers of the Bible are the answers for all the problems men face," attributed to Ronald Reagan. This selection is "dubious, and, incidentally, intellectually lazy since that is not a direct quotation," wrote Staff Attorney Sam Grover.

"What possible purpose could there be for selecting that quote other than to promote the bible to students?" Grover asked. "When MVISD manipulates historical quotes by removing context and isolating lines that promote Christianity or religion in general, it violates the right of conscience of its students."

"The district cannot even fall back on the argument that these quotes have educational merit, given the many examples of misquotes, misattributions, and entirely fraudulent quotes displayed on its walls," charged Grover.

For example, the school misattributes the quote, "It is impossible to govern a nation without God and the Bible," to George Washington. "Given that the district shares its name with President Washington's estate, this is a conspicuous misattribution that should be corrected immediately," FFRF said. A nonreligious quote attributed to Thomas Jefferson is also entirely invented.

"The district sets a poor example for its students if it cannot be bothered to fact check the messages it chooses to endorse," Grover wrote, calling the misquotes and modifications "worrisome intellectual dishonesty."

FFRF first alerted the district to constitutional problems with the quotes, among other issues, last year. After reviewing documents received in response to a records request earlier this year, Grover determined there could be no possible constitutional justification for the display and sent the latest letter.

School district employees, acting in their official capacities, requested specific quotes, most selected from a master list created by Superintendent John Kaufman and school board member Steve Assay, FFRF learned from the records. Thus, "the quotes on the walls of MVISD are school district speech subject to the Establishment Clause, not private speech posted as part of a public forum."

MVISD should remove all quotes that endorse religion, concludes FFRF.

FFRF is a national state/church watchdog with more than 22,500 members, including nearly 1,000 in Texas.