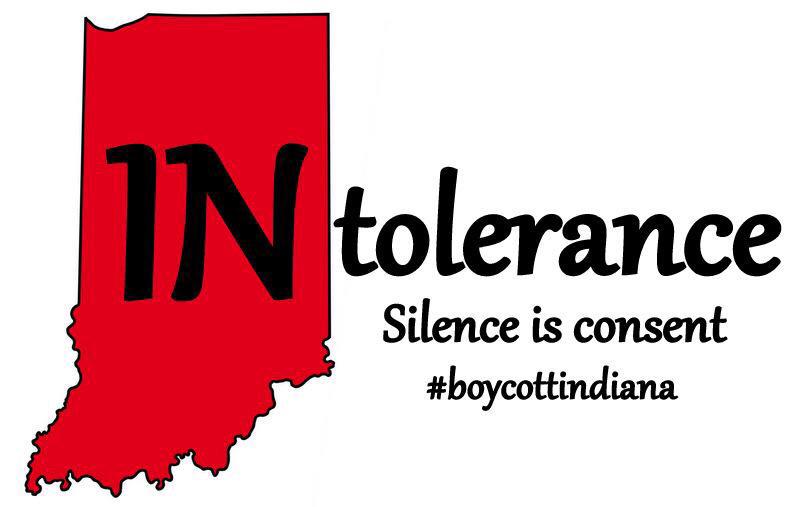 When my mother-in-law Pat Barker's eyes were opened to religion after a lifetime of devout fundamentalist belief, she poignantly told my husband, Dan: "I'm so glad I don't have to hate anymore."

"You don't have to hate anymore" could be the slogan of the movement known by the hashtag #boycottindiana.

No one should hate in the name of religion. But certainly no one should be allowed to legally discriminate in the name of their god. Bigotry is not divine. No state should pass a law, like Indiana did last week, which grants religious citizens and corporations license to break laws they feel go against their religion, such as anti-discrimination laws protecting gays.

Indiana passed a state version of the federal law, the Religious Freedom Restoration Act, that brought us the Supreme Court's infamous Hobby Lobby ruling last year, setting women's contraceptive rights back half a century. In that ruling, the right-wing, male, Catholic bloc on our Supreme Court ruled that corporations have "religious rights" that can be "offended" if employees don't follow their boss's religion, and that supersede the rights of women. The court decreed that as long as RFRA is a Congressional law, Hobby Lobby doesn't have to follow Obamacare's contraceptive mandate.

Clearly, it's time for Congress to overturn the federal RFRA, which has seeded state RFRAs in about a fifth of our states. If it's not in your state yet, watch out — it's coming soon.

Thanks to corporations that are more caring than Hobby Lobby, Indiana has become the focus of national consciousness raising and consternation. The NCAA released a statement: "We are especially concerned about how this legislation could affect our student-athletes and employees. We will work diligently to assure student-athletes competing in, and visitors attending, next week's Men's Final Four In Indianapolis are not impacted negatively by this bill."

Organizations such as gaming convention Gen Con and $4 billion software company Salesforce are already threatening to move operations out of Indiana.

Every hour, it seems, another city or state joins the boycott, including the mayors of Seattle, San Francisco, Portland, the governors of Connecticut and Washington. Celebrities such as George Takei and Audra McDonald have decried the law.

Tim Cook, the head of Apple, noted "something very dangerous [is] happening in states across the country . . . A wave of legislation . . . [to] allow people to discriminate against their neighbors . . . America's business community recognized a long time ago that discrimination, in all its forms, is bad for business. "

FFRF knows that these laws are bad for business, women, LGBT rights, and true religious liberty.

It's heartening to see the public concern over passage of the Indiana Religious Freedom Restoration Act. But we also need to channel that concern against the 18 other state RFRAs (Arkansas is poised to pass its version this week), and the granddaddy that inspired them at the federal level.

FFRF with several children's advocacy groups submitted the only amicus brief in the Hobby Lobby case (written for us by Marci Hamilton) asking the Supreme Court to overturn the federal RFRA.

It's time to repeal the federal RFRA. Let's have no hate in my state — or in these United States.