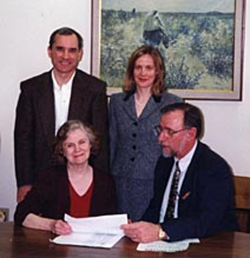 A nationally-watched Wisconsin law to create a state coordinator to "assist" clergy to develop "community-wide standards of marriage" was ruled unconstitutional in a firm decision issued on May 25, 2000, by U.S. District Judge John Shabaz. The law was to be modeled after a Christian program called Marriage Savers, based in Maryland. Marriage Savers director Mike McManus suggested that its funding source be the federal Temporary Assistance to Needy Families. Federal funds for needy families, totaling $210,000, were to be raided to promote religion. Plaintiffs included not only the Foundation and its staff members, but the Rev. Charles Wolfe, pastor of Plymouth Congregational Church, Madison. The case is Freedom From Religion Foundation v. Joe Leean (99-C-813-S).