The 2012 election will be pivotal in America's history - and freethinkers can be the deciding voice!

The "Nones" (nonreligious) conservatively make up a fifth of the U.S. adult population. At least a quarter of young adults are "Nones." This makes seculars as powerful as the core "religious right." 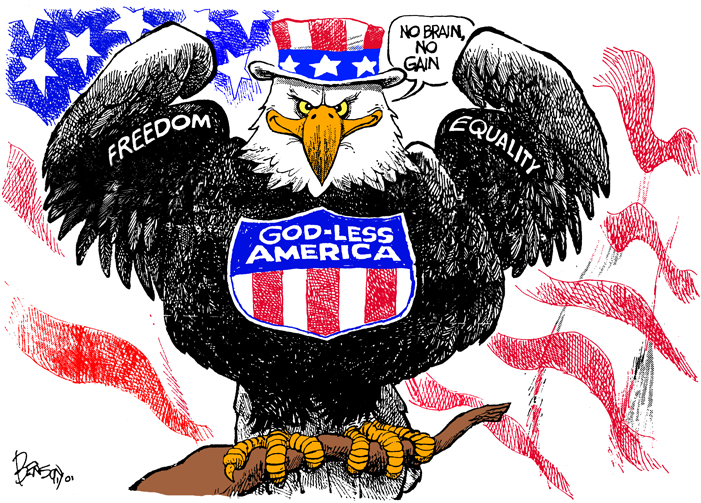 Inform the debate so that secular voices are heard and our vote counts! Register yourselves and others, and participate by voting in upcoming run-offs and on November 6.

Our nation faces major challenges: the economy, increasing poverty, environmental crises. Educational challenges and competing in a global market are made more problematic in America, which is handicapped by misplaced loyalty to religion over progress and reason.

The political debate is further complicated by the intense pressure on political candidates to wear religion on their sleeves, by "gotcha" issues which encourage politicians to kowtow to religious lobbies, and by polls which show that an atheist would still be voters' least desirable presidential candidate. Only 54% of Americans recently told Gallup they would vote for an atheist (which is up from previous polls) and 58% would vote for a Muslim, while 90% or more of Americans would vote for a black, a woman, Catholic, Hispanic or Jewish presidential candidate.

This is a country where half of the population rejects evolution, making Americans credulous, uninformed and vulnerable to political manipulation. Many religiously-motivated referenda will be appearing on ballots, which is used as a way to lure "religious right" voters to the polls.

(Get one of these bumperstickers)

Never in our history has there been a greater need for engaged, informed secular citizens to stand up for freethought, family and freedom.

(Get one of these bumper stickers)

(Get one of these lapel pins)

The religious right — fundamentalist and Catholic churches — are tirelessly exploiting church congregations to reach and influence voters. We expect many election-year political abuses. Some theocratic organizations are even openly encouraging ministers to break the IRS code and endorse from the pulpit.

A special word to freethinking students — this is an exciting time to be on campus, where you can make a difference. Make voter registration the goal of your freethought clubs through November 6. Set up tables. Arm yourself with the facts. Know your rights. Check with your city or county voter registrar's office to ensure you and your friends know how to register and apply in time for the appropriate ID (government photo ID is being required now in many states that used to accept campus photo ID).

Standing up for our godless and secular Constitution,

As a 501(c)(3) nonprofit organization, FFRF is strictly prohibited from engaging in political campaigns. We do not endorse or oppose any candidates for public office at any level of government. This page is merely intended to encourage our members and other American secularists to get out the vote this election season.

Donations to the Freedom From Religion Foundation are gratefully received and may be designated for a specific purpose or for general support. All gifts and dues given to the Foundation are deductible for income tax purposes.

Other Ways to Give

Give a gift membership

Enlighten those on your gift list! Gift membership recipients will receive 10 issues of Freethought Today.

Give a Gift Membership

"Those who expect to reap the blessings of freedom, must undergo the fatigue… of supporting it." —Thomas Paine

For a free sample issue of Freethought Today, as well as further information about the Foundation, fill out this form and you will receive a complimentary info packet soon.